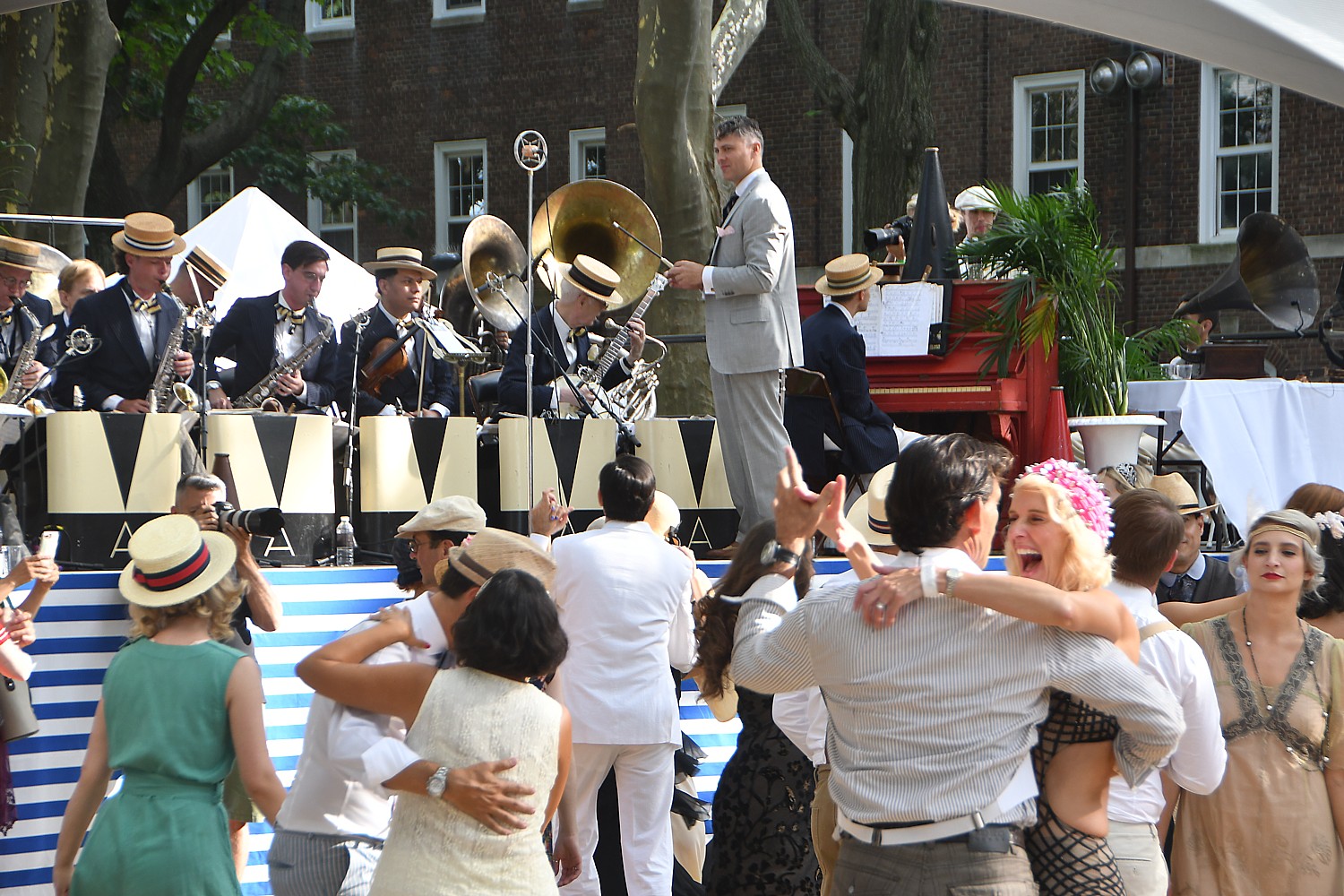 Dancing to the hot jazz of Michael Arenella and His Dreamland Orchestra, at the Jazz Age Lawn Party on Governors Island © Karen Rubin/goingplacesfarandnear.com

June abounds with some of the special happenings that define New York City:

The 40th Annual Museum Mile Festival, the biggest block party in the cultural capital of the world, takes place on Tuesday, June 13, 6 pm-9 pm, rain or shine on a mile-long stretch of Fifth Avenue, from 82 Street to 105 Street. It is a fantastically festive event, with street performers – clowns, magicians, bands – plus art on the street activities. Best of all, eight museums are open at no charge, many offer entertainment and special activities inside.

Begun as an initiative to spur the development of new museum audiences and to increase support for the arts during the fiscal crisis of the 1970s, Museum Mile was formed as a consortium by the museums that share the Fifth Avenue address. It has become one of the most popular happenings in a city known for spectacular events – some 40,000 turn out. It’s such a wonderful opportunity to visit museums you might not otherwise see – I am always surprised.

Expect long lines and, if you are strategic in your planning, to get in about 3 or 4 museums during the course of the night, depending upon how much time you spend enjoying the street entertainment.

Don your best Gatsby-era duds, pack a picnic basket, grab the ferry to Governors Island, and be prepared to be transported back to the 1920s: the 13th annual Jazz Age Lawn Party takes place over two weekends: June 16 and June 17, 2018 and August 25 and August 26, 2018. The event kicks off at 11am and ends at 5pm.

There, conductor, composer, musician and crooner Michael Arenella presents a personally transcribed, one-of-a-kind songbook for your listening and dancing pleasure by his Dreamland Orchestra, playing the Hot Jazz of the 1920s.

Governors Island is a sensational getaway destination, in its own right – historic sites, bicycle paths, playgrounds, art venues, and marvelous festive “happenings.” Be one of the first guests to stay overnight on NYC’s historic Governors Island with Collective Retreats when it opens June 1. With unique accommodations including luxury tents and designer modular containers, guests will enjoy a full-service hotel-style retreat with unparalleled waterfront views of New York City and the Statue of Liberty (collectiveretreats.com).

Shakespeare in the Parks

In the summer, Shakespeare productions pop up in parks and parking lots. While The Public Theater’s Central Park shows—the renowned Shakespeare in the Park—are the most famous, other NYC theater companies put on plays for free in one-of-a-kind city settings:

Shakespeare Downtown
A Midsummer Night’s Dream: June 14–24 (Thursdays–Sundays); 6:30pm
This troupe presents Shakespeare as audiences first experienced it: in the round, outdoors and in daylight. Castle Clinton in The Battery is the unusual venue for A Midsummer Night’s Dream, a light comedy for a bright summer’s eve. Free tickets are distributed at 6pm for the 6:30pm show, which wraps just before dusk.

Smith Street Stage
A Midsummer Night’s Dream: June 18–July 1; 7:30pm
In 2010, Smith Street Stage had just five actors for its debut production, Romeo and Juliet. Now the company has grown to include more than 30 members, who’ve performed for thousands over the course of eight summers in Brooklyn’s Carroll Park. This season they take on the popular comedy A Midsummer Night’s Dream.

Free Shakespeare in the Parks: Hip to Hip Theatre Company
King Lear and All’s Well That Ends Well: July 26–August 26
Hip to Hip Theatre Company specializes in family-friendly Shakespeare compressed to 90 minutes. This series tours two shows in repertory to more than a dozen City parks in Queens, Brooklyn, Manhattan and the Bronx. A half hour before showtime, free workshops for children use games to help kids connect to the characters and stories. For up-to-date details on performance locations and start times, visit their Facebook page (www.facebook.com/HiptoHipTheatre/)

Hudson Warehouse Summer Stage
Romeo and Juliet: June 7–July 1 (Thursdays–Sundays); 6:30pm
Hamlet: August 2–26 (Thursdays–Sundays); 6:30pm
Hudson Warehouse’s Shakespeare productions—staged on the expansive North Patio of the Soldiers’ and Sailors’ Monument in Riverside Park—have been set in the 16th and 17th centuries, in modern times and even in an apocalyptic framework. The orange glow of the sunset adds to the beauty of each performance. This year, the company does two of Shakespeare’s most well-known plays, Romeo and Juliet and Hamlet.

The 2018 Metropolitan Opera Summer Recital Series once again brings free outdoor recitals featuring rising young stars of the opera world to all five boroughs. The series, now in its tenth year, is presented in collaboration with City Parks Foundation’s SummerStage Festival and features six free concerts between June 11 and June 29. The first two recitals, on June 11 at 8 p.m. at Central Park SummerStage and June 13 at 7 p.m. at Brooklyn Bridge Park, features soprano Latonia Moore, who starred in Verdi’s Aida, tenor Mario Chang, who is currently singing as Arturo in Donizetti’s Lucia di Lammermoor, and baritone Joshua Hopkins, who will star as Mercutio in the Met’s upcoming production of Gounod’s Roméo et Juliette, joined by pianist Dan Saunders.

The performances will take place at Van Cortlandt Park, Bronx (June 12); the Great Lawn in Central Park, Manhattan (June 13); Cunningham Park, Queens (June 14); and Prospect Park, Brooklyn (June 15). Musicians from the New York Philharmonic will perform Beethoven’s Wind Sextet, Op. 71; Tchaikovsky’s Souvenir de Florence; and the World Premieres of wind sextets by Very Young Composers of New York City — 14-year-old Chi-Chi Ezekwenna’s It’s Almost Summer! and 13-year-old Nicolas Lipman’s Sriracha! — in the Free Indoor Concert in Staten Island at the Music Hall at Snug Harbor Cultural Center & Botanical Garden (June 17).
The performances in the Bronx, Queens, Manhattan, and Brooklyn will begin at 8:00 p.m. and will conclude with fireworks. The Free Indoor Concert in Staten Island will begin at 3:00 p.m.; tickets are free but required for the Staten Island concert, and are available at nyphil2018.bpt.me.

The 12th annual Make Music New York (MMNY) festival will feature more than 1,000 free public concerts across all five boroughs on June 21, the first day of summer and the longest day of the year. Highlights include a Broadway concert in Harlem, vocalists recreating birdsong in Brooklyn Botanic Garden along with performers in Union Square, Central Park and Governors Island, just to name a few (makemusicny.org).
_____________________________
© 2018 Travel Features Syndicate, a division of Workstyles, Inc. All rights reserved. Visit goingplacesfarandnear.com, www.huffingtonpost.com/author/karen-rubin , and travelwritersmagazine.com/TravelFeaturesSyndicate/. Blogging at goingplacesnearandfar.wordpress.com and moralcompasstravel.info. Send comments or questions to [email protected] Tweet @TravelFeatures. ‘Like’ us at facebook.com/NewsPhotoFeatures 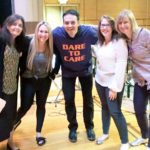 Learning about social studies through song at North Middle
Next Article

oard of Trustees of the Village of Port Washington North