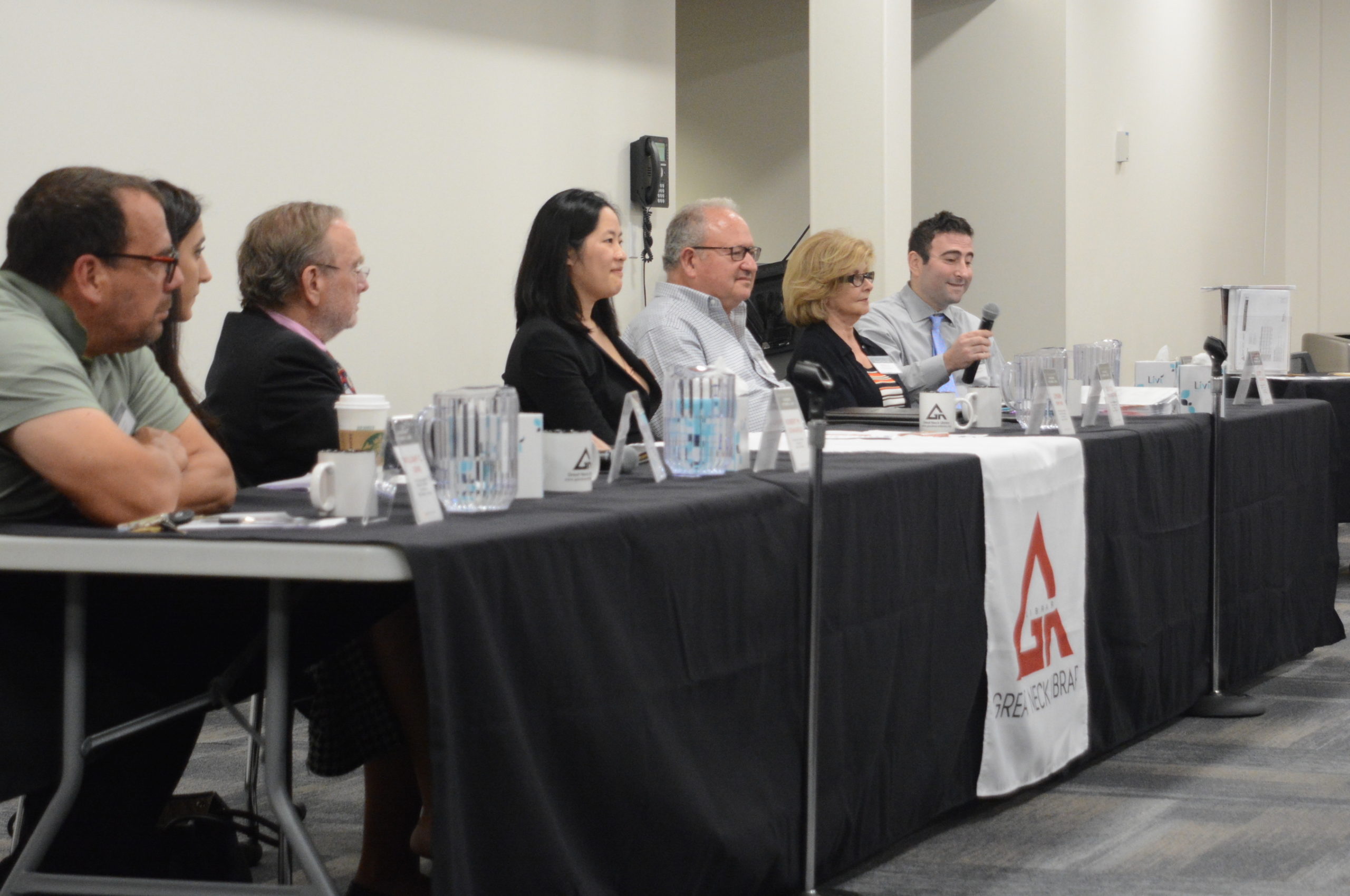 Seven candidates vying for positions on the Great Neck Library attended a forum on Thursday night. (Photo by Janelle Clausen)

Dozens of people gathered to meet the candidates vying for library board and committee seats at the Great Neck Library last Thursday, with candidates fielding questions on library programming, staff and the book collection.

Robert Schaufeld, an attorney and the current board president, is running as an independent candidate for the remainder of Francine Ferrante Krupski’s term, which would be January 2019 to 2020. This pits him against Scott Sontag, the Nominating Committee-endorsed candidate.

Trustee Chelsea Sassouni, who was appointed earlier this year to fill a vacancy on the board, also filed a petition as an independent candidate for the seat currently held by Joel Marcus, which would have a four-year term. This pits her against Nominating Committee-endorsed candidate David Zielenziger.

Additionally, Mimi Hu, another candidate endorsed by the committee, faces a write-in challenger.

The book collection was one of two topics to take center stage, with the candidates being asked what they would do to increase shelving space for books in the library and why “so many books” were given away, thrown away or kept in storage during and after the Main Library renovation.

Hu, describing herself as a “traditional book lover,” said it was the apparent discarding of books and a book bazaar at Great Neck House organized to save them that inspired her to get more involved.

Sontag said that the library has run into issues with planning, and perceptions about the lack of books led to many people not coming back.

“I think a lot of these issues unfortunately resulted in a lot of people not coming back to the library,” Sontag said.

Schaufeld said that some books have been recovered and “are being restored” such as art books, which are being returned to the library. The board has also been “evaluating all the space in the library” and “putting shelving everywhere conceivable.”

“We are making the best use of our space and our resources and we are very well aware of what the community wants and we are doing everything we can to achieve their desires,” Schaufeld said.

Pizer said there was a sale of books that were given away at the Great Neck House and explained that some books were “eliminated” because they had not been used in the last five years.

She also said that when it came to the weeding of books, “the professional staff of the library made the decision for the most part.”

“There was a prohibition on getting rid of any books in this library because we found that some books were gotten rid of willy nilly,” Pizer said.

Pizer also said “unequivocally” that there are no more books in storage. Some books are in repair, she said, and that there are “carts and carts of books that are being readied for the shelves.”

Additionally, Pizer highlighted planned renovations for the Parkville and Station libraries that will increase shelving space.

Zielenziger said he is glad to hear that books are coming back, but that it’s “taken so long,” and suggested setting up a “viable Friends of the Library group” so there would be more income available for book purchases.

Zielenziger also said that Pizer and Sontag largely dealt with the issue, but said the library has since faced a “damaged image.”

“The library suffers from a perception problem and one of the things that I would like very much to do is try to repair that, because really there is no reason for our damaged image,” Zielenziger said, “but it hasn’t been repaired.”

Sassouni said, “I think all of us are here to make responsible decisions going forward” and that Schaufeld and Pizer’s comments largely covered the issue.

Candidates were also asked about programming, including what programs they would reduce for budgetary reasons if they had to, their stance on bringing a “Dragon Queens” program to the Great Neck Library, and where they believe the library should go in terms of programming.

Zielenziger explained that the “Dragon Queen” program, which is present in the neighboring Queens Library, is one where a drag queen will engage in storytime with children.

He said he isn’t sure if “there’s that kind of that demand for that story hour in Great Neck,” but said it’s a question for staffers and that programming should be based on public demand.

Pizer echoed that sentiment and said “most of the programs are based on requests.”

Sontag said there is “plenty of programming” that could be brought to the library, but, “We want to make sure we bring in the right social values that fit in with our communities here.”

Gens said he’s “not sure he would support something like that.”

Sassouni said programming is a “reflection of the community’s request,” but that there are “other organizations in town” that could take on certain programs.

Schaufeld said the library “cannot have a policy that restricts that kind of programming” and said any kind of “censorship or prohibition” would go against everything he believes in.

“The library is open to all views whether they’re controversial or not,” Schaufeld said.

Sassouni said “programming is a reflection of the community’s requests,” but that there are also other organizations in town which could be better suited for certain programming.

Hu said political and personal views should not influence one’s decision and that she welcomes diversity.

“I see my role as representing all voices from the community and, that being said, I see our library as an intellectual hub of the community,” Hu said.

Sassouni said her general approach to programming would be seeing how many people utilize the programs, what’s costing the most, and talking to people who have attended the programs.

“It wouldn’t be specific – it would be based on usership,” Sassouni said.

Sassouni also said she wants to market the library’s offerings and that she’s particularly excited about the STEM lab and offering technology otherwise not available to the average resident.

“I’m interested in increasing usership and knowledge of the library’s resources across demographics within Great Neck,” Sassouni said.

Schaufeld said, if he had to reduce a program, he would look for programming that is repetitive and see if other communities are offering it. He said he would be willing to do joint programming with the right organization, thus enhancing community programming while reducing the burden on the library.

Schaufeld also said it is pivotal to be responsive to the needs of a diverse community.

“The library is the cultural center of the Great Neck community and the future of the library is tied to its relevance,” Schaufeld said.

Hu said it is her understanding that a trustee does not make the final decision on what programs should run and that, as a trustee, she would work with the director and others to express the community’s voice.

Zielenziger said he’d want to review programs and that the library “should always be open to new programs,” but that he would “rely on professional staff.”

Pizer said the board monitors statistics every month and they get “a sense of what the communities want and are attending.”

“The staff, every single month, alerts us to what the current trends are and the things that we should look at,” Pizer said.

Sontag said it’s important that when considering cutting something, the board should also ask what it’s being replaced with. He also said he’d try spending more time with whoever is involved in program decision-making.

“They did get increases, they are getting increases, I don’t understand where the question is coming from,” Schaufeld said.

Pizer also touched on a “push pull” existing between taxpayers and how much the staff can be paid.

“There is always a push pull between wanting to treat staff well and the people in the community who do not want to pay tax increases for the library, for the school, or for anything else,” Pizer said.

Sassouni said the trustees are “in the business of resource management” and that the question of staffing “requires a lot of analysis.”

Sontag said this is “just one of the things where we have to spend time looking at the staff meriting who gets a raise.”

Hu, a third-year law student, said she is currently learning about labor law and collective bargaining, but that she believes in “treating our staff well” as a general practice.

Zielenziger, recalling when the library staff had to make due without the Main Library as it underwent renovation, described the staff as “excellent,” but noted there hasn’t been “continuity” in the top levels of administration.

“It’s a great library,” Zielenziger said. “Our professional staff need to be paid well to serve it.”

Hu in particular was asked about her time commitment, but said it wouldn’t be a problem.

“I think everyone’s busy in this town,” Hu said. “Every profession is busy – even as a stay at home mom, you are busy.”

Pizer and Schaufeld emphasized how important it is to have time to serve on the board while attending its various committee meetings and executive meetings.

Sontag said the library needs to look at committees and try cutting down how much time is spent in them. 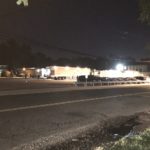