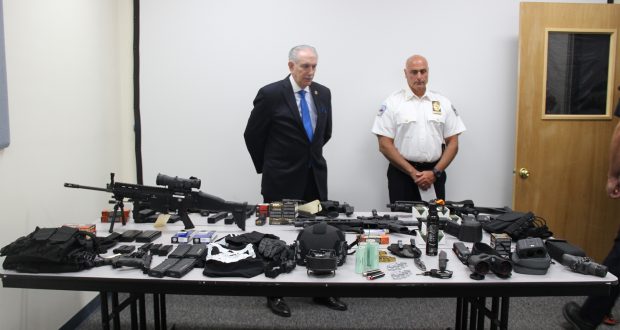 Great Neck resident and plastic surgeon Matthew Bonanno pleaded guilty to a felony in the Nassau County Court District Wednesday after two county police departments seized a cache of guns, ammo, and other weapons from him in 2019, officials said.

Bonanno faces five years of probation, handed down by Acting State Supreme Court Justice Terence Murphy of the county’s 10th Judicial District, according to Newsday. Officials also said he will lose his medical license due to the convictions.

Paul Gentile, Bonanno’s lawyer, contended that his client is “an esteemed plastic surgeon and an avid gun collector.” Gentile Wednesday told Murphy that Bonanno legally purchased the gun but failed to register it. Gentile also reportedly told the judge that Bonanno never fired the gun.

Bonanno was first indicted in Westchester, where he pleaded not guilty to 53 weapons charges- separate from the ones in Nassau County- in September 2019. Earlier this month, according to multiple reports, Bonanno pled guilty to attempted second-degree criminal possession of a weapon in Westchester. He faces an additional five years of probation in that case as well, according to reports.

Tuckahoe village police searched his vehicle after they were notified of threats being made by Bonanno against his estranged wife, according to the Westchester County district attorney’s office.

Gentile criticized the ways that police in Westchester and Nassau searched Bonanno’s property.

In October 2019, Gentile requested the Westchester trial be moved to the Bronx, where he served as district attorney in 1988.

“Dr. Matthew Bonanno cannot get a fair trial here in Westchester County,” Gentile said in an interview. “The jury pool has been tainted by the Westchester district attorney, with unlawful accusations of Mr. Bonanno being a domestic terrorist and a danger to himself, and others.”

A Look On The Lighter Side: The perfectly named little book of comfort