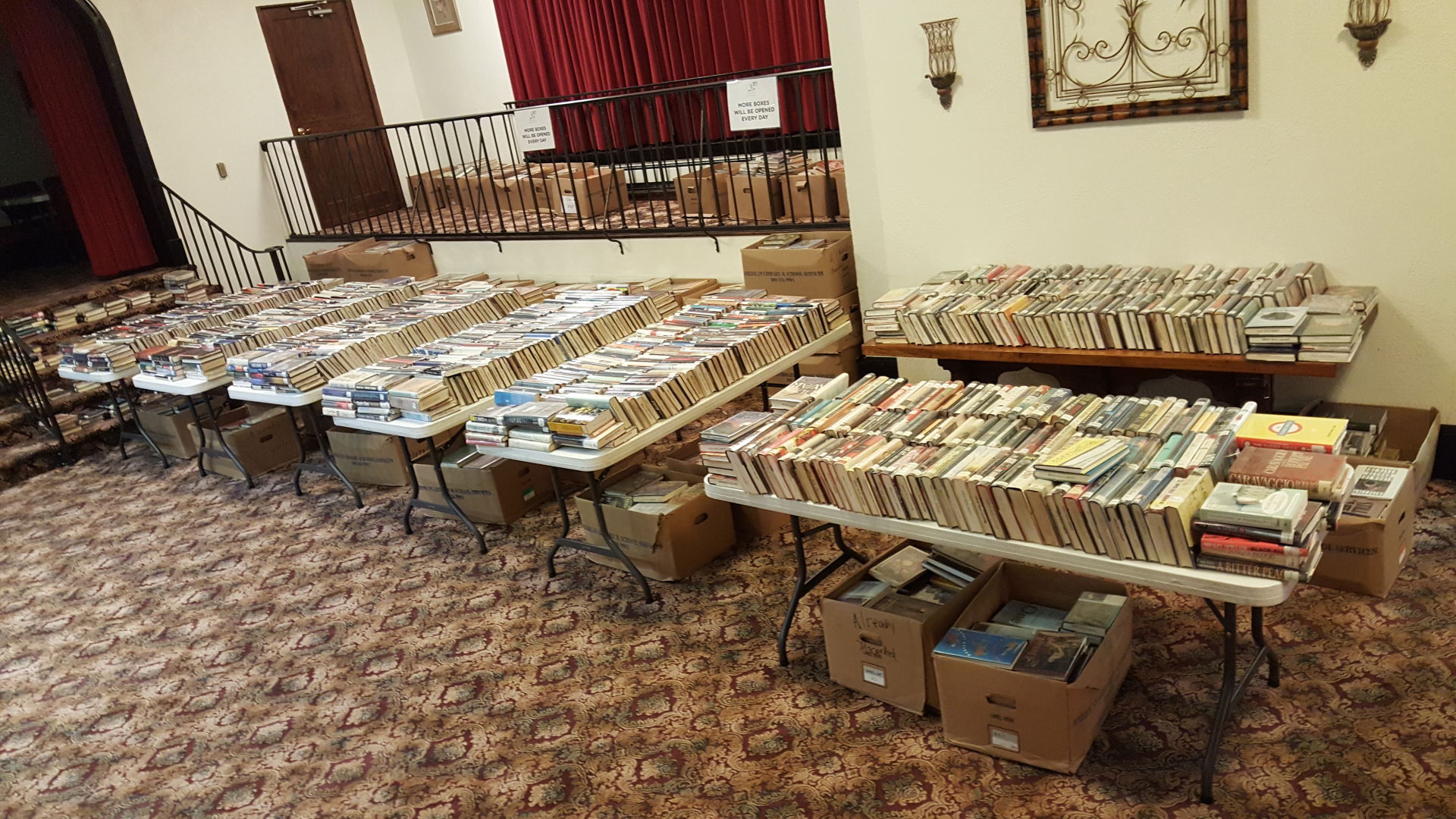 When Great Neck resident Rebecca Gilliar took on over 10,000 books that were set to be discarded by the Great Neck Library, she said, she was unsure how she was going to handle the  collection.
But after speaking with Great Neck Park District Superintendent Jason Marra, Gilliar said, she found a way to give the books back to the community from which they came.
Since Oct. 22, she has organized a free book bazaar at Great Neck House on Arrandale Avenue, where she said people from all over the North Shore have come to pick up titles from their favorite authors.
“I think it’s righting a wrong, but not entirely,” Gilliar said. “Truly my first option would have been to rent out a facility and store all the books until a time that I could make the library take them back, but I can’t do that.
“So the next best thing is to give them back to the community that paid for them in the first place.”
Gilliar has commended Marra and the park district for their efforts in supporting her initiative.
Although he was probably hesitant to place such a large collection of books at Great Neck House, she said, Marra saw the bazaar as a good opportunity for the community and even provided her with a truck and four employees to help bring books over from the library’s Main Building.
Gilliar said the collection includes some of the “most fabulous authors on the planet,” including Anita Loos, Alphonse Daudet, Ken Kesey, Vladimir Nabokov and John Gardiner.
She also said there were noteworthy books available including biographies on the Reagan family, Queen Elizabeth and the royal family and Barack Obama.
Gilliar said she has received a largely positive response from those who come to the bazaar, with many people offering to volunteer or help her find places where books could be sent.
Some of the people she has met through the bazaar have reached out to her to afterward, she said, and have given her contacts for libraries in less fortunate communities and in prisons.
Gilliar criticized the library for discarding so many books that have become a part of history.
“They don’t understand that they have not just given away some books. They’re not just discarding books,” she said. “They’re discarding everything we value about the society we live in. They think they’re substituting electronics for it.”
“These two things belong, they support each other, they complement each other,” Gilliar added. “We need them both.”
Kathy Giotsas, the Great Neck Library’s executive director, said  that the library had to find the right balance between hard copies of books and electronic versions.
“We’re now at a point where a library serves the needs of many people and not just going with the electronic format,” Giotsas said. “If we see a demand in a certain type of format, we will invest more money in that, but we need to keep a good balance between the two.”
She said that although the library was discarding a number of books after the Main Building’s renovation, it has a natural “weeding” process, which is based on a number of factors.
For example, Giotsas said, books on technology and medicine often become outdated as new research and information is discovered.
She also said that the library purchases 10 copies of “best sellers,” but after a few years, the demand for those books dwindles and all of the copies are not needed.
Giotsas said she did not have an exact number of books that were discarded.
According to New York State Library data for the Great Neck Library, from 2011 to 2015, the library has expanded its electronic book collection by about 25,000 to 37,000, while its adult book collection has dropped by over 50,000 to 132,750 and its children’s book collection has dropped by about 32,000 to 60,000.
Giotsas said there are “triggers” that the library uses to go out and purchase more books, which include automatically ordering best-selling books and looking at patron demand.
Gilliar was also critical of the library for sending discarded books to organizations like Big Brothers, Big Sisters, a nonprofit youth mentoring organization, when there are other less fortunate communities nearby that would benefit from additional books.
“We could afford to buy these books and there are communities who couldn’t afford to buy them and don’t have them,” she said. “And we were just going to ship them out with Big Brothers, Big Sisters, I don’t know what they do with the books.”
But Giotsas defended sending books to charities, as she said they not only benefit needy children but society as a whole.
“The more we increase literacy, the more chance we have to improve kids’ quality of life,” she said. “From there you’re able to assist them in furthering education and making them employable later on when they grow up.”
Giotsas said patrons of the library have voiced displeasure about shelves that are “less than full,” but they are still in the process of restocking books on shelves.
Some books are still in storage, she said, and others are still in the hands of the moving company that assisted in bringing boxes to the Main Building.
Giotsas said the Main Building was reopened to the public upon patron request even though the moving process was not yet complete. She expects everything to be fully moved in by the end of the month.
“We listen to the patrons and they said even if you’re not fully moved in, we’d still like to come,” she said. “We’ve opened up our doors for them to use the library but they also have to be patient.”