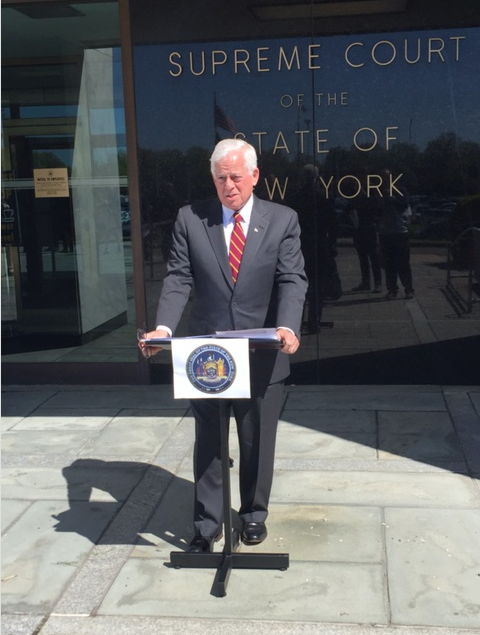 The bill comes after a number of politicians in Nassau County, including County Executive Edward Mangano, were brought up on federal charges and used campaign funds to pay for their defense.

“For too long, New York state election laws have been called the most lax in the nation,” Lavine said Monday at a news conference in Mineola. “Just in Nassau County over the past couple of years we have seen multiple indictments of public officials at every conceivable level of government.”

According to state Board of Election filings, Mangano, who was brought up on federal corruption charges in October, has paid more than $300,000 in campaign funds for his criminal defense since 2015.

Mangano and his wife, Linda, were indicted along with former Oyster Bay Town Supervisor John Venittio on charges involving a bribery and kickback scheme with a previously indicted restaurateur.

Silver, who was convicted in a federal corruption trial in 2015, spent around $3 million in campaign funds on legal fees, records show.

Former state Senate Majority Leader Dean Skelos, a Republican, who was also convicted in a federal corruption case, spent more than $750,000 in campaign funds for his defense.

“My legislation will close this lifeline to corrupt politicians and stop this criminal activity before it happens,” Lavine said.

A version of this bill is being co-sponsored in the state Senate by Sen. John Brooks (D-Seaford) and Sen. Todd Kaminsky (D-Long Beach).

Mangano has not said whether he will seek another term.