Village of Great Neck voters will have a chance to meet Board of Trustees candidates on Tuesday, June 11, exactly a week before residents decide to cast their ballots in a hotly contested race for mayor and two trustee seats.

But candidates from both sides are scheduled to appear in two different places – at almost the same time.

Mayoral candidate James Wu and trustee hopefuls Julia Shields and Harold Citron, running on the Village for All slate, will be hosting their second Meet the Candidates night from 8:30 to 9:30 p.m. at Great Neck House. Their previous event was May 28. 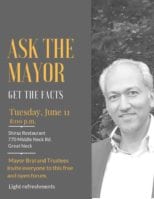 Mayor Pedram Bral and Trustees Anne Mendelson and Steven Hope will meanwhile be at Shiraz Restaurant at 770 Middle Neck Road, hosting a free and open forum with light refreshments, according to a flyer, starting at 8 p.m.

It is billed as an opportunity to “ask the mayor” and “get the facts.”

No debates appear scheduled between the candidates at this time.

Judy Temkin-Jacobson, the voter service chairperson of the Port Washington-Manhasset League of Women Voters, said Wu reached out to her by phone on May 22 about scheduling a forum. She then tried calling Village Hall, left a message, emailed the village, and received notice yesterday that the email was forwarded to the mayor, she said.

The League of Women Voters does not have the local chapter host candidate forums to ensure impartiality since a moderator would have no stake in the election, Temkin-Jacobson also said.

Asked if it’s possible for the league to schedule a forum with all the candidates before the election on June 18, Temkin-Jacobson said, “It will be difficult, but theoretically it is possible.”