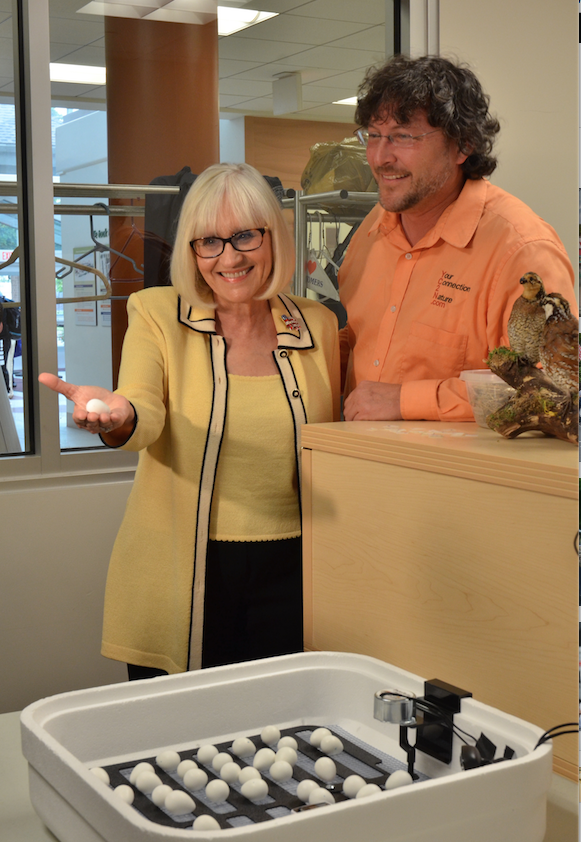 Thirty-six bobwhite quail will soon be full as a tick.

The Town of North Hempstead is raising a batch of quail eggs that will eventually hatch. The birds will be let out in North Hempstead Beach Park’s 200-acre wooded area to combat ticks while avoiding the spraying of toxic chemicals.

“When I learned about the Northern bobwhite quail study I was very interested,” town Supervisor Judi Bosworth said. “The town is constantly on the lookout for natural methods we can use to control disease-causing pests that do not involved using toxic chemicals.”

The quail eggs are being incubated at the North Hempstead TV studio in Westbury and can be watched on a live “Quail Cam” on the town’s website.

“The fact that we also get to raise the quail ourselves and enjoy watching the eggs hatch, well that is just part of the fun,” Bosworth said.

The quail project is a pilot program designed by Eric Powers, a biologist who is host of the North Hempstead TV show “Off the Trail.”

Once the eggs hatch, the quail will remain at the studio for another two or three weeks and then will be transferred to a park in Suffolk County where they will mature.

In July, the birds will be released in the wooded area along the Hempstead Harbor Trail.

“Lyme disease is a very serious condition caused by deer ticks, which are prevalent in wooded areas and grasslands all over Long Island,” Bosworth said.

The Northern bobwhite quail population has decreased significantly on Long Island due to feral and indoor-outdoor cats, their biggest predator, town officials said.

“Cats take a massive toll on our ground-dwelling wildlife, such as Bobwhite Quail, which turns out to be our front line of defense against ticks,” Powers said in a statement. “So the biggest help anyone can do is to keep your cats inside.  If the community wants my help re-establishing quail populations around Long Island to combat ticks then I need your help in return…please keep your cats inside.”

You can watch the live “Quail Cam” here.