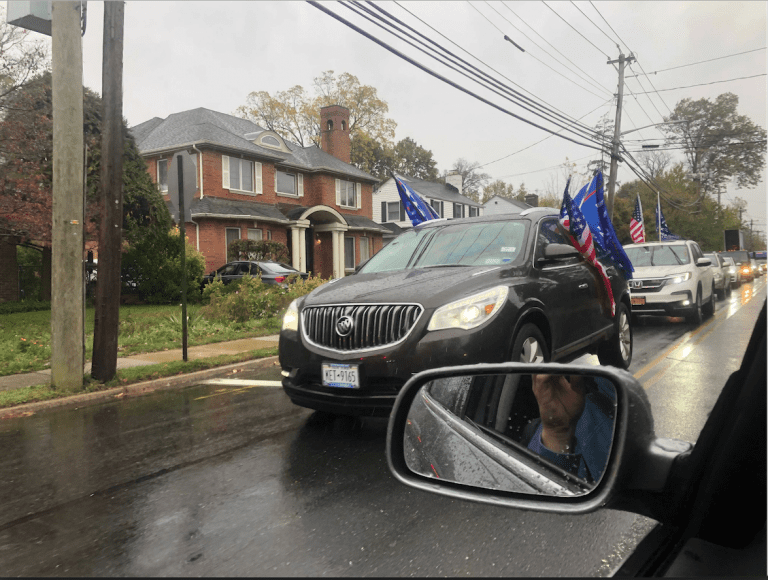 More than 100 cars decorated with flags, banners and signs supporting President Donald Trump paraded along Middle Neck Road in Great Neck on Sunday afternoon, which led to traffic jams, drivers not abiding by traffic laws, and yelling of expletives and racial slurs from the car windows.

One group of younger men packed into a black Jeep flying an American flag, Trump 2020 flag and a “Thin Blue Line” flag, made a left onto Hicks Lane from Middle Neck Road and cut several drivers off who intended to keep going straight.

Two of the younger men made obscene gestures to the drivers they cut off, and another one in the back yelled expletives while the driver sounded his horn.

Residents throughout the Great Neck peninsula received flyers last week that advertised a car parade to support Trump beginning at the Best Market parking lot, later changed to the Parkwood lower parking lot, and to then travel north on Middle Neck Road and circle the peninsula.

Village of Great Neck resident Rebecca Rosenblatt Gilliar said she saw around 125 cars in the procession, and the influx of traffic and lack of police presence made it difficult for emergency vehicles to navigate the area.

“The procession of about 125 cars clogged two of the three access roadways of the Great Neck peninsula,” Gilliar said. “They consumed the length of Hicks Lane making the passage of an ambulance heading to any one of the three local hospitals a difficult, even treacherous trip, especially in the rain. The cars honked incessantly, though Mr. Trump says there is a ‘silent’ vote for him here in the suburbs that is about to emerge. Not so silent.”

American flags were also prominently flown out of around 25 cars throughout the peninsula, despite the inclement weather. Federal law states: “The flag should not be displayed on days when the weather is inclement, except when an all-weather flag is displayed.”

The initial gathering of the cars at Parkwood’s lower parking area featured more flags, cardboard cutouts of Trump’s face, and racially targeted comments to people of Asian descent. In one recorded instance, a woman in a “Make America Great Again” hat was videotaping a car driving by as someone yelled, “Take this s**t back to China!”

Efforts to find out who or what group organized the event were unavailing. Several representatives at Best Market, where the parade was originally scheduled to begin, declined to comment as they did not “want to be featured in a fake news piece.”

The Great Neck Park District Board of Commissioners released a statement after the event.

“The Park Commissioners are aware that social media postings include video of racist comments made by some participants in the unsanctioned event,” the statement reads. “The Park Board vehemently rejects all racist conduct or comments whenever made. The gathering was in no way a Park District event. The Park District issued no permit for the gathering, in fact the sponsors did not apply or receive the permit that would have been required by the Park District.”

Park District Superintendent Jason Marra said the district “regulates public assembly as permitted under the First Amendment by requiring all who desire to use park facilities for purposes of speech and assembly to submit a permit application.”

Marra said the Park District contacted the Nassau County Police Department when the group refused to follow directions from the park’s staff since no permit was filed.

“Those rules were ignored by the large group that materialized at approximately 2 p.m. Sunday seeking to enter the Parkwood lot,” Marra said. “Park District security personnel advised all who arrived that access was limited to those seeking to use the Parkwood facilities or groups with permits for assembly. Our staff advised all who were there for any other purpose that they would not be admitted onto the premises.  When the group refused to follow direction from our staff, they created public safety concerns beyond the resources of the Park District.”

Efforts to reach the  Police Department for comment were unavailing. There was no traffic advisory sent out by the department regarding any road closures or parade routes.

Steve Markowitz, the president of the Great Neck Democratic Club, said the remarks made at the event on Sunday were reflective of Trump’s campaign messages.

“During the recent pro-Trump car rally in Great Neck racist anti-Chinese comments were heard which clearly reflect the impact of the President’s campaign messages,” Markowitz said. “I want to assure the local Asian community that the Democratic Party, our leadership at the national, state, county levels – and right here in Great Neck – reject and denounce these efforts and stand with all our residents, no matter their race, religion or national origin.  I call upon our local Republican elected and party officials to do the same.”

Efforts to get comments from the Republican Party in Nassau County and the Trump campaign were not immediately successful.

The remarks during Sunday’s event were not the first instance of anti-Asian incidents being reported in Great Neck.

A letter signed by nearly 40 parent leaders in the school district last month said younger Asian students were asked if they eat bats and were called “COVID-19 spreaders” by other students. The letter said the racial slurs and hateful comments have been directed primarily at “young, defenseless children ranging from elementary to high school age.”

“Racism has no room in Great Neck!” Bral said. “I have and will continue to strongly denounce and condemn any form of racial slurs against any community, specially in [the] Great Neck area. We can not be a Republican or a Democrat unless we are an American first.”

“Once again, a few residents turned the focus of a political rally in our town on its ear,” Berkowitz said. “Assumably the people cheering in and out of the cars were a part of the parade route to show their support, as is customary but just a few of the shouted remarks instead redirected any positivity to their personal messages of bigotry and divisiveness.”