The Green Party of Nassau County has urged lawmakers and Roslyn Water District officials to supply a completed Environmental Impact Statement prior to the start of construction on an air stripper water-purifying system tentatively planned for a site within Christopher Morley Park.

In an April 10 statement that appeared on the party’s Facebook page, chairman Jim Brown wrote that a “full public process be undertaken” in determining whether to move the air stripper, initially approved for placement at the water district’s well on Diana’s Trail in the Village of Roslyn Estates, to the park.

“The Green Part of Nassau County feels a public, scientifically-detailed process as we have outlined, with a full [Environmental Impact Statement], public hearings and prior state legislative action will best protect the health and welfare of local residents, as well as achieving the optimal protection of the environment,” he wrote.

The air stripper project had been approved by the Town of North Hempstead in late February as part of the Roslyn Water District’s $20.9 million bond proposal on the condition that officials work to get land from Nassau County within Christopher Morley Park, a transaction that would require approval from the state Legislature.

The Roslyn Water District is comprised of the villages of Roslyn, Roslyn Estates, Roslyn Harbor, East Hills and Flower Hill as well as parts of North Hills and Port Washington and the unincorporated areas of Roslyn Heights, Albertson, Greenvale and Glenwood Landing.

Roslyn Estates residents have been opposed to constructing the air stripper at the water district’s well at Diana’s Trail because it would rid contaminants – including the chlorofluorocarbon Freon-22 – from the water and emit them into the air.

In a March 21 letter to state Assemblyman Charles Lavine (D-Glen Cove), state Environmental Conservation Commissioner Joseph Martens wrote that the agency would launch an investigation seeking the source of the Freon-22, which water district officials have said may never be found due to the contaminant’s long half-life.

Water District officials have said design plans for the Christopher Morley Park air stripper have begun, but Brown wrote that the party would be opposed to breaking ground at the tentative site until full approval from the Legislature is completed.

“So much of our county has been developed and the Green Party of Nassau County strongly believes that we must preserve the nature that is left to us,” Brown wrote. 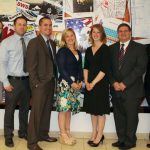 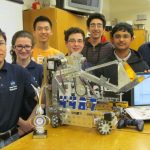 Wait ‘til next year for robotics team