For the third year in a row, Lake Success-based company Hain Celestial Group Inc. has cracked Fortune’s list for the 100 fastest growing companies in America.

“Once again Hain Celestial’s growth has merited ranking as one of Fortune’s 100 Fastest Growing Companies, now for the third year in a row.  This is a tremendous accomplishment for the company and well-deserved recognition as a Fortune 1000 company,” said Irwin D. Simon, founder, president and chief executive officer of Hain Celestial Irwin D. Simon. “I am grateful to have the opportunity to share this with our supportive employees and shareholders.”

Fortune required a company to have posted an annualized growth in revenue and earnings per share of at least 15 percent annually over the three years ended on or before April 30, 2015 to be qualified for inclusion on this year’s list, according to a methodology explanation on the Fortune website.

Fortune also requires companies to have a yearly revenue of at least $50 million and a yearly net income of at least $10 million, according to the Fortune website.

Other notable companies appearing on the list include Facebook at number 10, Netflix at number 46, and Under Armour at number 62.

Headquartered at 1111 Marcus Ave., Hain Celestial is the provider of popular brands such as Almond Dream, Terra, and Celestial Seasonings. 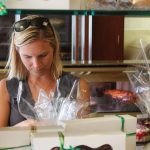