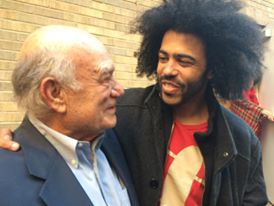 Hamilton made history as a leader and as a hit Broadway show.

Lin-Manuel Miranda’s hip hop musical is on its way to becoming the fourth play in all of American history to generate $1 billion in revenues.

Ron Chernow’s book, that inspired Miranda, was initially published in 2004.

The “New York Times,” this past week, had it listed as No. 1 best seller for “combined print and e-book nonfiction.”

Chernow was also No. 1 in paperback nonfiction.

In addition, “Hamilton, The Revolution” by Miranda and Jeremy McCarter was No. 2 on “the print hardcover best seller list.”

This is an annotated libretto of the play that won Tony, Pulitzer and Grammy awards.

When my astute Columbia professor, Richard B. Morris entitled a Hamilton essay, “The Glory Road” (in 1973), no one could have conceived the dramatic impact that this extraordinary Founding Father would continue to have 212 years after his death.

Thanks to theater savvy of my spouse and children, we have seen “Hamilton” twice, first in previews at the marvelous New York City Public Theater.

Then my family arranged a celebration of my entry into my ninth decade by an advanced purchase of 16 tickets so we could see “Hamilton” again on Broadway with family and friends.

I came to both of these performances with special interests.

The American Revolution had been my special focus from college through graduate school and during 56 years of teaching.

Of course, I gave major attention to Hamilton, but, in full disclosure, I acknowledge that Jefferson was my favorite.  I developed an entire course that focused on Jefferson.

At Hofstra from the 1960s into the 1980s I had two remarkable colleagues who admired Hamilton.

Robert Sobel and Broadus Mitchell were among the most acclaimed scholars and teachers ever at Hofstra.  Sometimes I felt they “double-teamed” me in the Jefferson-Hamilton historical debate.

Bob Sobel probably published more books than any other professor at Hofstra, and he and Broadus brought acclaim to our university because their scholarship won national and international attention.

Professor Sobel was brilliant; he had one of the most lively and fertile minds I ever encountered.  He was a master at probing critical analysis, often punctuated with satire and wit.

Perhaps it was his New York City upbringing and education that caused him to speak so rapidly.

Jefferson frequently remarked that Hamilton was so prolific and wide-ranging in his writing and speaking that it would require squads of others to try to keep up with him in responses.

All of us who knew Bob Sobel felt the same way.

Bob celebrated Hamilton’s multifaceted genius, as a key aide to General Washington, in the movement for a new Constitution and in devising a stable economic system as secretary of the treasury.

For Sobel, that distinctive leadership greatly overshadowed the views of Hamilton’s critics: his role in the Jay Treaty, his creation of a huge army against a nonexistent “Whiskey Rebellion,” and his support for the “Alien and Sedition Acts.”

Jefferson was on the opposing side of those three significant conflicts (none of which is adequately addressed in Miranda’s play).

Unlike Bob, Broadus was reared in the South and had a gentle lilt in his voice (as well as a sweetness of manner that endeared him to all).

Mitchell and Sobel both taught at Hofstra’s New College, under the creative leadership of David Christman.  Not surprisingly, they were friends and in agreement concerning Hamilton’s major contributions.

I had the chance to hear Broadus speak eloquently on another Hamilton issue when he and I attended an annual meeting of the American Historical Association.

A few historians were giving presentations critical of Hamilton because of his reputation as a womanizer (indeed, the musical does highlight this theme, including the Mrs. Reynolds prostitute arrangement).

One of the speakers at that AHA conference cited John Adams who had said of Hamilton: “There are not enough whores for all of his juices.”

Broadus rose to comment; he was recognized by most scholars there assembled.

In his courtly, understated manner, he noted: “Of course, those of us who have studied Hamilton have long known about his sexual affairs; any man can do such things, but how many men could accomplish what Hamilton did?”

For sure, this was situational ethics by Professor Mitchell.

He and Bob Sobel were right about the genius of Alexander Hamilton (not only getting “my shot” as an immigrant from very humble origins, but also in the power he gained and the directions he set for the new nation).

Still, even in this season of Hamilton, Jefferson warrants more attention for his opposition to Hamilton and for what the alternatives he and Madison offered say about that generation and our country’s values [to be continued — perhaps a hip hop “Jefferson.” 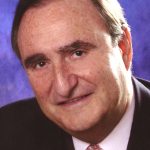