Long before downloading music became the norm, listeners bought CDs. In 1995 Alanis Morisette released “Jagged Little Pill” which sold over 33 million copies worldwide and became one of the bestselling albums of all time, winning the Grammy for Album of the Year. Now 24 years later, a new generation will be introduced to Morisette’s music and lyrics through the terrific new Broadway musical Jagged Little Pill.

Album fans will recognize all the familiar music, and sadly 24 years later, the angst and pain Morisettte sang about in her songs is more relevant. And finally, Broadway fans will get jukebox musical where the music really works without being forced. Tom Kitt (Next to Normal, Almost Famous, If/Then) provides the musical supervision, orchestrations and arrangements.

At first glance, the Healys are the perfect American family. The kids are the ultimate overachievers, the father has a high-paying job and the perfectionist mother is the envy of mothers everywhere. But just behind the cheerful veneer is a father too busy at work, a mother addicted to painkillers after an accident, a son who is not quite as perfect as he seems and an adopted African-American daughter struggling with her identity in more ways than one.

The music and lyrics for the musical were written and composed by Alanis Morisette with the book by Diablo Cody. It includes the well-known 90’s hits “You Oughta Know,” “Hand in My Pocket” and “Ironic,” along with several lesser-known tunes. But this is not one of those jukebox musicals that alternates between silly dialogue and songs that seem to burst forth out of nowhere – quite the contrary. The dialogue flows perfectly into the songs, which are a perfect fit for telling a surprisingly serious story.

The music is superb and appropriate, even gently mocking at times. When Frankie Healy, the adopted daughter, (Celia Rose Gooding) reads her work in her creative writing class, she sings the lyrics of “Ironic,” only to be stopped by a classmate, criticizing that her use of examples isn’t ironic. (I always felt that way myself.) Later in Act II, the song “You Oughta Know” is a showstopper when Jo, Frankie’s lesbian girlfriend, pours out her heart in a painfully moving rendition. As Jo, Lauren Patten almost stops the show with her wonderful singing.

Some disturbing scenes are ingeniously choreographed using dancer Heather Lang as the alter-egos of a character who OD’s and later another character, a drunken high school senior who is raped by a classmate. The violent events in Jagged Little Pill are presented in a clever and stylistic manner. The movement direction and choreography is by award -winner Sidi Larbi Cherkaoui.

Befitting a work by two of America’s best-known feminists, the show directed by Diane Paulus (Waitress, Pippin) features the women. As the mother, Elizabeth Stanley gives what may well be one of the best performances of the year. One can’t help but feel compassion for Stanley as the perfect wife, who hides her use of pills to ward off her pain, especially memories of past trauma. Celia Rose Gooding, Lauren Patten and Kathryn Gallagher as Bella, a rape victim, are all riveting as teenagers struggling with coming of age amidst life’s travails. The vocally impressive ensemble is diverse and is reflected by the performers and their costumes.

As the father, Sean Allan Krill wins our sympathies as the workaholic father who is too busy to recognize what’s happening to his family. Jagged Little Pill is sadly so realistic and timely. Young people are protesting injustice while their parents work desperately, trying to maintain comfortable lifestyles and to steer their children into the right colleges.

This is not necessarily a feel-good musical as Pill delves deeply into contemporary issues including race, opioids, and sexual assault. In the relatively intimate Broadhurst Theater, the show is fittingly devoid of fancy scenery and costumes but full of creative staging.

Whether you are a longtime Morisette fan or a new one, you will find much to appreciate in Jagged Little Pill. An enjoyable, uplifting musical about race, rape and addiction that isn’t cheesy or maudlin. Isn’t it ironic?

Kremer’s Corner: 2020 the year of political potholes
Next Article 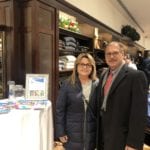