Jeffrey Moslow has been appointed to the Sands Point Board of Trustees, filling the seat held by Marc Silbert, who died in June.

Sands Point Mayor Edward Adler said Moslow, 55, is extremely qualified for the position but what made him the right choice is his background serving on the village’s Board of Zoning Appeals, as Silbert had before becoming a trustee.

Moslow said what has driven him towards public service in Sands Point are the many years  he has spent in Port Washington and his work for other not-for-profits. He currently serves as a trustee for Tufts University and the Boys Club of New York.

In the not-for-profit sector, he said he has found that he can make fairly large contributions based on his business experience, but he also enjoys working in a collaborative setting with a team.

Adler described Moslow as a “worthy successor” to Silbert who brought invaluable experience to the Board of Trustees.

Moslow has served on the Sands Point Board of Zoning Appeals for more than three years. Adler said he has “been extremely well thought of his by his colleagues” and was quickly elevated to deputy chair of the board.

His appointment continues a tradition that the Sands Point Board of Trustees has kept for nearly 50 years – having a sitting trustee with zoning experience, Adler said.

The zoning board is a good place to begin public service in the village, where one learns to deal with residents and make compromises and adjustments, the mayor said.

Moslow described his time on the zoning board as very rewarding. He said he and the board worked hard to find a balance between the interest of the applicant and the interests of the greater community and continuously came up with solutions that satisfied all constituencies.

As a trustee, he looks forward to “serving the residents of the community to continue to keep Sands Point the special place it is,” he said, “and to hopefully make it even better.”

Moslow grew up in Port Washington, where he and his wife, Linda Moslow, raised three sons. He attended Tufts University and Harvard Law School and formerly served as a senior partner at Goldman Sachs. He now oversees private investments. He has been a resident of Sands Point since 2002.

He was officially sworn in as a trustee in August.

Moslow’s predecessor served on the board for almost 20 years until he succumbed to a heart illness in June amid an election. 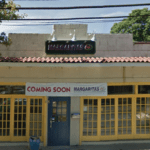 Manorhaven Margarita’s Cafe opening date yet to be determined; ‘Coming Soon’ sign posted outside for over a year
Next Article 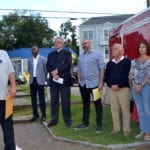 PAL upgrades field with help from the community