Judaism is thriving in Great Neck, according to a study by the UJA Federation of New York.

The study of Judaism in New York City and Long Island used data from a decennial study of New York’s  Jewish population to break down the variations between the region’s communities, according to a UJA press release.

“The Geographic Profile,” said UJA-Federation of New York President Jerry W. Levin, “provides information on a very localized level so that the entire New York Jewish community can better understand the crucial distinctions among the many areas that make up our eight-county catchment area.”

And for Great Neck, the study revealed levels of Jewish engagement well above the average for Nassau County.

Great Neck’s Jewish population has spiked 26 percent since 2002, and is now 71 percent of the peninsula’s overall population, according to the report.

“On every Jewish measure included in this study, Great Neck exceeds both the Nassau rate as well as the [overall New York City and Long Island] rate,” said the study.

Some 71 percent of Jewish people in Great Neck belong to a synagogue, 73 percent have traveled to Israel, and 43 percent keep Kosher – markers of Jewish culture and religiosity that easily exceed the averages in Nassau, according to the study.

The high levels of Jewish belief and practice on the peninsula reflected in the attitudes of the Jewish population; 64 percent said being part of a Jewish community is very important, and 59 percent feel that they belong to such a community.

Jews in Great Neck are also much less likely to marry outside the faith than Jews in the rest of Long Island and New York City. Just 1 percent are intermarried in Great Neck; the overall rate is 22 percent. 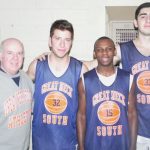