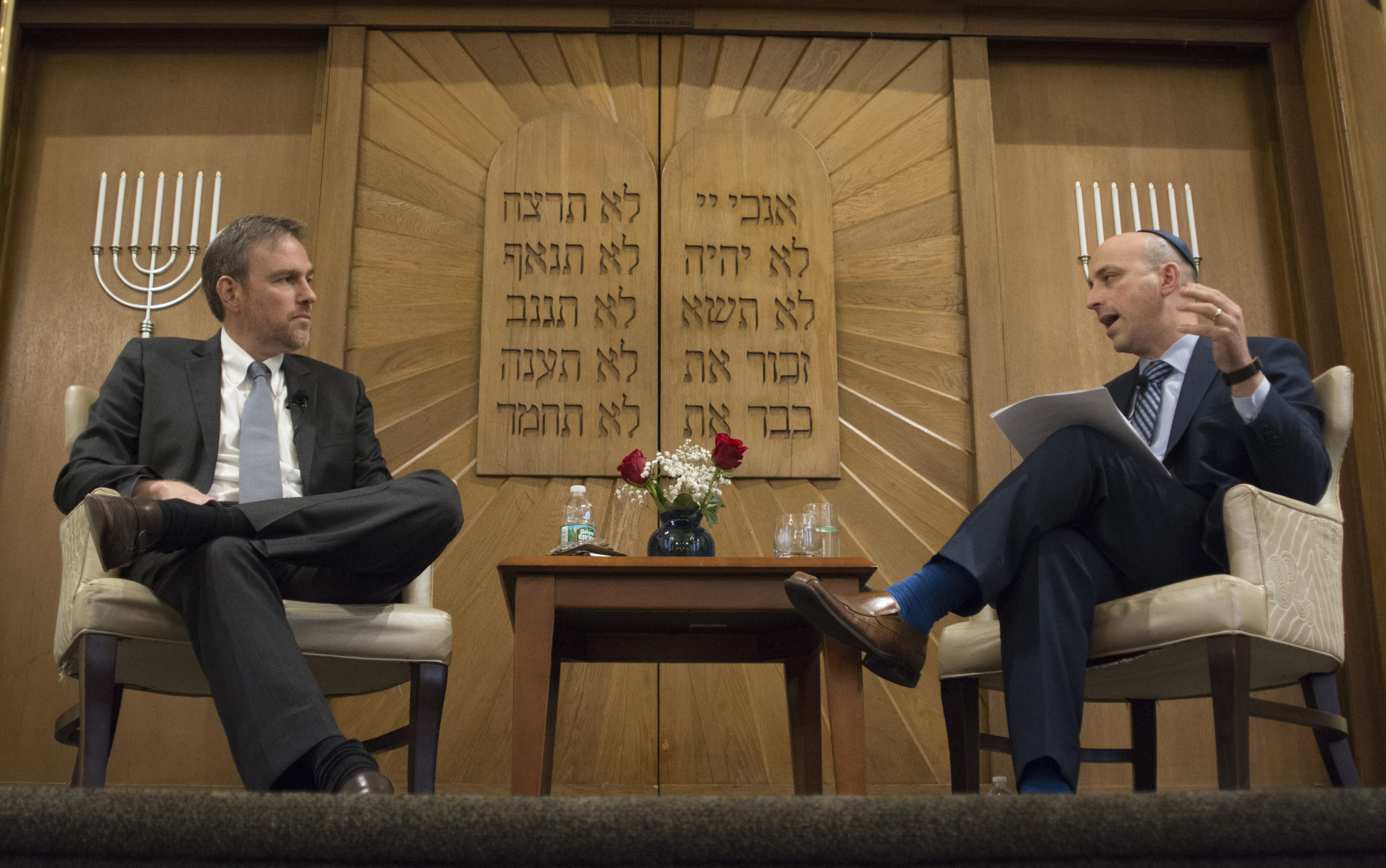 Bret Stephens and Jonathan Greenblatt discussed Antisemitism, the Middle East and the state of the nation at Temple Israel on Sunday night. (Photo by Janelle Clausen)

Stephens and Greenblatt touched on foreign policy topics like Russia, the Syrian Civil War, Iran and Hamas, as well as the state of Israel in general. They also examined anti-Semitism, including in the United States and Europe.

Stephens, speaking to critics of Israel’s policies, emphasized “the severity of the security crisis” the nation has faced from its neighbors and terrorists, while remaining “the only progressive beacon” in the Middle East.

“The only logical reasonable consistent liberal or progressive position in America is to support the only liberal and progressive state that champions the very values they claim as their own in the Middle East,” Stephens said.

Stephens also noted the danger of Iran, which he said has developed ballistic missiles and is “colonizing Syria” by backing organizations like Hamas, while decrying the current nuclear deal.

“… When you have your foot on your adversary’s neck and that adversary is the mullahcracy of the tyrants who run Iran, my idea is keep it on their neck until we get the deal that we need,” he said.

But, Stephens added, he does not have faith in the Trump administration to renegotiate a better deal and instead advised rigorously enforcing it.

Greenblatt agreed that Iran’s actions have been troubling.

“It is alarming at best and existential at worst to see what the Iranians are doing with the continued missile development and with continued militarism in the region, but in particular what’s happening in Syria,” Greenblatt said. “I haven’t heard anyone quite put it that way, but ‘colonizing’ is a great way to describe it.”

Stephens said he believes that President Trump’s approach to Syria, specifically his statements on pulling out troops and ordering strikes that are “more show” than anything else, will “radically increase the danger to Israel,” which he believes is “on a direct course” for war with Iran.

Stephens instead underscored the United States’ duty to its Kurdish allies, supported a partition of Syria and entertained the idea of working with the Russians.

But perhaps just as important would be directly targeting Bashar Al-Assad, the president of Syria.

“I don’t feel a great deal of sympathy for someone who is responsible for the death of 400,000 people and who has violated every civilized norm,” Stephens said, drawing applause from the crowd. “And we have a vital American interest in sending a message to every other dictator around the world: if you use these [chemical] weapons, that will be the end of you. Not of your munitions, not of this or that airbase, of you.”

When later asked about Russia’s backing of the Assad regime and possible consequences, he said a war with the Russians would be unlikely.

“Russia is a mouse that roared,” Stephens said, noting that its economy is smaller than Italy’s.

Greenblatt said the crisis in Syria has also echoed into Europe, with hundreds of thousands fleeing the region.

“Bashar al-Assad and his Iranian proxies are responsible for the worst refugee crisis since the Second World War, which has spawned, in many ways, a series of cascading problems in Europe,” Greenblatt said.

Stephens said that anti-Semitism, while horrifying to many in Europe, has remained a presence on the continent, partly manifesting in “vicious characterization of Israeli policy.”

“I think the Jews of Europe are living on borrowed time,” Stephens said.

When later asked about anti-Semitic sentiment in the United States, Greenblatt said the country, while not without its incidents, is a “pretty darn good place to be Jewish.”

“Fourteen percent is less than half of what it was when we started looking at this in the 1960s,” Greenblatt said, of surveys about the extent of anti-Semitic attitudes and opinions. “America is a more tolerant, better place for the Jewish people than one could argue of any country in the history of humanity.”

As for the overall state of democracy in the United States, Greenblatt argued in some ways it is healthier than ever as evidenced by rallies, walkouts, having the judiciary and media “stand up to power,” and having more people than ever running for office.

Stephens said the president has launched a “relentless assault on journalism” and government institutions, as well as decency – remarking that he never thought he’d have to explain to his children “what profession Stormy Daniels is in.”

“I’m a Never Trumper in this sense: I think Trump is not a dictator, I don’t think it’s right to compare Trump to a Duterte in the Philippines or even a Viktor Orbán,”  Stephens said, referring to the leader of Hungary, “but I think Trump is debasing and degrading institutions that are vital to the long-term health of American democracy.” 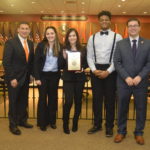 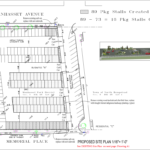 Construction to begin May 7 on Manhasset commuter lot