As a new suburbanist, I have much to learn about Long Island.

So I called up Eric Alexander, director of Vision Long Island. He’s been involved in smart growth planning in the region for years. I mainly wanted to find out if he thought the Swedish program “Vision Zero” would work on Long Island and help reduce injuries and deaths.

We ended up discussing many other issues. Here is our conversation, edited for brevity.

Q: Is Long Island part of Vision Zero in either Suffolk or Nassau counties? Would it work here?

A: The answer is no. It’s a New York City initiative. It’s kind of a one-stop shop. Long Island isn’t structured that way. It would be almost impossible to have a Vision Zero initiative without creating an independent transportation bureaucracy for the region.

On a whole host of levels, it may be very inefficient and bureaucratic and controlling in ways Long Islanders just wouldn’t want… Any initiatives we found that are creative or progressive [must] come from the bottom up – from communities to the government rather than creating a government entity from the top down.

Q: So where does improved road safety start on Long Island?

A: The roadways maintained by the county governments are the ones that have the highest accident rates. They are the major corridors managed by the states and counties.

So you need states and counties to embrace safer street principles. You can call it any number of things. You can get a number of projects in place to increase safety and reduce speed and prevent fatalities… I’ve learned to believe in local determination… What I have found about villages is that they are more successful at place making and downtown management than bigger governments.

Q: So we are talking about Jane Jacobs v. Robert Moses applied to Long Island?

A: Totally. Jane gets it. Robert Moses was all about big government.

Q: So what do you make of Gov. Cuomo’s plans to spend billions on rail projects on Long Island?

A: We support all of that. That’s the right kind of regionalism. You’re not going to have the Village of Great Neck Plaza or Valley Stream… doing the regional plans for transportation and regional investments… Clearly there is a need for third track investments. The third track folks thankfully reached out to third track communities and made sure there were investments in those communities. We are glad to see that process move forward properly.

A: Pedestrian amenities and bus service for poor folks are kind of getting the short end of the stick here. That’s of deep concern to us and should be to others on Long Island. We desperately need this bus service on Long Island. And we need safe roadways. We have an increasingly walking population because of an aging population and because younger people don’t want to drive as much as older generations.

We have more immigrant families from Queens and Brooklyn moving to Nassau County. They are used to a walking culture. Our economic development strategy is driven around mass transit and we see the transit improving in places but it is dangerous to walk to the transit. There’s a problem with that equation.

Q: As we develop new transportation infrastructure on Long Island, how do we design better regarding safety and human life? Do we need more speed cameras?

A: Before you get to speed cameras, you need to look at the physical design of the roadway. If you have designed a road with 13-foot lanes that have a design speed of 45-65 miles an hour and you put up a speed camera, people will speed.

You designed the roadway like a speedway and then you just collect tickets. The posted speed should be in sync with the engineering design speed. That means narrower lanes, medians, countdown timers, crosswalks, roundabouts – all sort of traffic-calming and pedestrian infrastructure. That signals to the driver that this is a place where we slow down.

Q: Can you point to a few leaders or bright spots?

A: There are roughly 100 business districts on Long Island. Roughly 60 have done some kind of plan… Roughly 40 have approved projects. 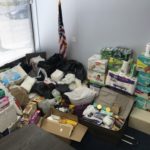 Hurricane donations may shift from Houston to Florida
Next Article