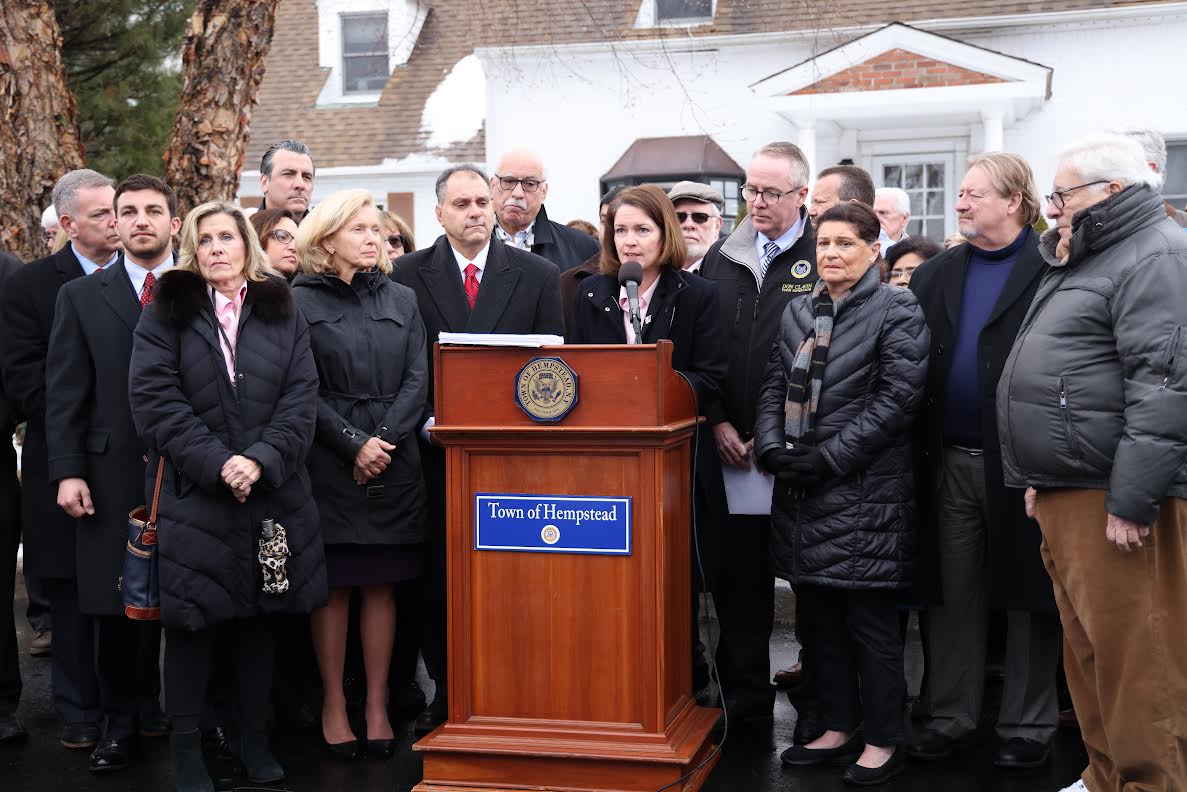 Nassau County officials denounced on Thursday a statewide plan introduced by Gov. Kathy Hochul that would require local municipalities to permit residents with accessory dwelling units in all single-family.

Officials also claimed the ADUs could negatively impact the quality of life, electric and water supply, emergency services and other aspects throughout Nassau and Long Island.

“From overcrowding classrooms, endangering the safety of communities, straining public safety, sanitation, traffic, and utility resources to destroying the environment and increasing the carbon footprint, Gov. Hochul’s policy directly threatens L.I.’s quality of life and will turn our neighborhoods into the overcrowded urban centers that most residents fled from in order to live here,” Blakeman said.

“Allowing Accessory Dwelling Units on the property of homes that are currently zoned for single-family use is nothing short of a direct attack on our suburban communities and the quality of life we cherish,” DeSena said. “The legislation proposed in the Governor’s budget cannot be allowed to go forward, and I will work tirelessly to defeat it on behalf of those who have elected me.”

“People have moved to Long Island to enjoy a residential quality of life, and the Governor has launched a full-scale assault on our family-friendly communities,” Clavin said. “We will not stand for it.”

“Governor Hochul’s surreptitious inclusion of these proposals into the budget is intentionally designed to avoid democratic discussion. If the nature of our community is to change, shouldn’t we at least have a discussion about it,” Munsey Park Mayor Lawrebce Ceriello said in a statement. “Our leaders in Albany hate our safe streets, our good schools and our suburban way of life.”

Last month, Hochul rolled out a $25 billion five-year housing plan aimed at creating and preserving 100,000 affordable homes throughout New York, 10,000 of which having support services for vulnerable populations.

Hochul’s address also called for changing zoning laws for Accessory Dwelling Units, which include basements, attics and garages, among others.

“To permit these vital options and help reduce housing costs, Governor Hochul will propose legislation to require municipalities to allow a minimum of one ADU on owner-occupied residentially zoned lots,” a book released by Hochul with her State of the State address said. “This legislation would allow municipalities to set minimum and maximum size requirements that both meet safety standards but will not prevent reasonable new construction.”

Hochul also cited the financial hardships caused by the coronavirus pandemic as to why she believes the legislation is vital to implement throughout the state.

“In the wake of the pandemic, it’s crucial that we tackle the housing crisis and make New York a more affordable place for all,” Hochul said. “These bold steps are a major step forward in transforming our housing market, protecting affordability and increasing the housing supply.”

For New York City, the legislation would require an amnesty program to legalize existing ADUs if they are brought into compliance with its building code.

Suozzi said that he supports ideas to tackle housing problems, but disagrees that this is the method to do so.

“Do we have to work on the issues of affordable housing and segregated neighborhoods? We absolutely do,” Suozzi said. “But we will not allow local zoning to be overridden and not erode the power of local governments.”

“By reforming our zoning laws to allow for increased density, we can address these interconnected issues,” the legislation reads. “This legislation ensures that reforms will be applied equally statewide, and no individual local government or neighborhood is required to shoulder the entire burden.”

Brian Cunningham, chairperson for the Village of Williston Park’s Board of Zoning Appeals, acknowledged the need for affordable housing throughout the state and noted that transit-oriented development along with mixed-use development are some of the resources local municipalities already possess to create affordable homes.

“There are many tools available to local governments to add affordable housing options to their communities,” Cunningham said in a letter to Blank Slate Media. “Some have chosen high-density development around train stations or downtowns. Allowing 2nd and 3rd-floor apartments over stores in commercial districts is another available option.”

Cunningham urged residents to contact their local senator or assemblyperson to prevent the local zoning amendments from being implemented.

“If Manhattan has its way with your community, bye-bye local zoning control,” Cunningham said.

If Hoylman’s legislation is passed or Hochul’s plans remain intact, New York will join Connecticut, Massachusetts and California as states whose governing bodies dictate zoning laws throughout their respective municipalities.

From the Right: Hochul unlikely to crack down on DA Bragg
Next Article