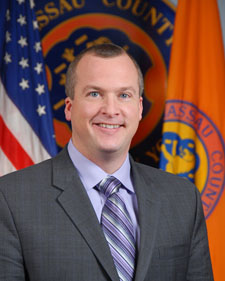 Rob Walker, Nassau’s former chief deputy executive, pleaded guilty to one count of obstruction of justice last week, and his lawyer estimated he would face a prison sentence of less than two years.

Walker, who served under former Nassau County Executive Edward Mangano, was scheduled to stand trial June 3 at the federal courthouse in Central Islip. His trial had been postponed several times.

In February 2018, Walker was indicted on a single count of obstruction of justice and one count of making false statements to federal investigators, which was dropped as part of his plea agreement.

Walker’s attorney, Brian Griffin of Foley Griffin LLP in Garden City, told Newsday: “Mr. Walker pled guilty to a single count of obstruction of justice and in exchange, the remainder of the indictment will be dismissed.”

He said the negotiated plea agreement is a “fair and just resolution to the matter.”

The attorney estimated federal sentencing guidelines for Walker’s charge to be between 10 and 16 months and said that he and his client would seek a sentence less than the guidelines.

Walker pleaded not guilty to both counts in February 2018.

The case centers on Walker’s acceptance of a $5,000 bribe from a county contractor at a Notre Dame football game in 2014.

Prosecutors said once Walker became aware that federal investigators were looking into corruption in Nassau County, he made several attempts to reach the unnamed contractor to convince him to hide the payoff from the grand jury.

The pair arranged a meeting at a Hicksville park where Walker returned the money to the contractor, who then turned it over to investigators while still at the park, according to the prosecution.

When confronted by the FBI, prosecutors say, Walker made false statements, including his denial that he ever received a cash payment from the contractor.

“While holding public office, Walker attempted to conceal his corrupt conduct by urging a witness to lie to the grand jury,” said Richard Donoghue, U.S. attorney for the Eastern District of New York.

“Those who swear an oath to serve the public are expected to promote transparency, not obstruct justice,” he said. “The Eastern District will hold officials accountable when they violate the public trust.”

Age not a heavy lift for NHP bodybuilder
Next Article