Pauli Libsohn made a promise to her mother before she died to get her writing published, and she has delivered three times on that promise.

The first time was in 2014 with “Immortal Kisses: Confessions of a Poet,” a compilation of love poems about her 60 years of marriage to her husband, David.

In April, Libsohn published a second volume of her mother’s poems, “Songs of You: a Postscript.” And in June, she followed that up with the publication of a third volume, “Silhouettes: Literary Passageways,”

“She was a housewife and she was a mother, and all this was going on inside her head,” said Libsohn, who grew up in Great Neck. “She was brilliant. She wasn’t just a housewife or just a mother, she was all this. She didn’t realize how brilliant she really was, but I realized it and I knew something had to be done.”

Libsohn said her appreciation of her mother’s writing began when was given a poetry assignment in her creative writing class at then C.W. Post College.

The Manhasset resident went home with a plan to ask her mother to work on the assignment for her, but the plot backfired.

Libsohn’s mom, Mitzi, made her daughter do her own assignment.

The next day, however, Mitzi came to Libsohn with a beautiful love poem, the beginning of hundreds to come over the next few decades.

After years of sitting together at the kitchen table, discussing titles for Mitzi’s works, Libsohn suggested a collection of poems be published. Both her parents thought she was crazy, but she persisted with her promise after her father died in 2004 and her mother four years later.

“She was a housewife and she was a mother, and all this was going on inside her head,” said Libsohn, who grew up in Great Neck. “She was brilliant. She wasn’t just a housewife or just a mother, she was all this. She didn’t realize how brilliant she really was, but I realized it and I knew something had to be done.”

Many of these poems, all themed around love and the adoration Mitzi had for her husband David during their 60 years of marriage, became “Immortal Kisses: Confessions of a Poet.”

Since publishing the first book on her mother’s behalf in 2014, Libsohn has discovered dozens more and published in April a companion to the original, “Songs of You: a Postscript.”

“Unbeknownst to me, I never knew these manuscripts, these poems, existed,” Libsohn said. “It was a complete and total surprise because I thought the first book was going to be a one-hit wonder. I always felt my mother never felt these poems were up to par or as valuable as what was in the first book, and that’s why she never told me. I believe these poems were all written after my father passed away.”

Libsohn said the tone was different between this collection and the first had changed, but the works still focused around love.

The couple met in the 1930s at Far Rockaway Beach in Queens when Mitzi was 12 and David was a 17-year-old lifeguard. The pre-teen brought her books to the beach to impress the older gentleman, and she made recommendations for him to read as well. 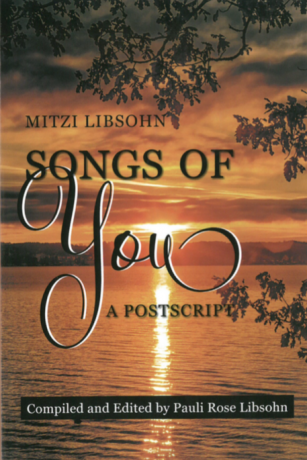 The pair was deeply invested in each other from the start, beginning a love story akin to a fairy tale.

In “Songs of You,” the third section is filled with 32 poems written by both Mitzi and David carefully extracted from their 1,800-book collection before Libsohn donated it to the Post library a few years ago.

“What I had to do was I had to open up every book and all these letters and bits of odd things my parents had left in them,” Libsohn said. “In the meantime, I saw some pages but didn’t stop to read them, so I tore them out because there was writing on them. When I went back, they were little poems that my parents had written to one another and inscribed in the books they gave to one another as gifts.”

The first poem of the “Encores of You” section was written by David on the couple’s wedding day, remembering their chance meeting on the beach as they begin a life together. A few pages later, “Nevermore” combines both parents on one page.

“The first part was written by my father, he had to dictate that to me when he was very ill,” Libsohn said. “He did not want to miss a wedding anniversary. And my mother answered him with the bottom half.”

Mitzi was never a professional writer but she was often seen writing.

Every night as she prepared for sleep, she would read in bed with a pen and notepad, tucking the writings into a box and hidden from anyone’s sight for decades.

“For years, she would be writing every night when she would go to bed, and I never questioned it because when you’re a teenager, you don’t care what your mother’s doing,” Libsohn said. “So I never thought it was important. After I found the box of poetry, then I was going through this other box I always saw, and low and behold I found all of this, all the things she was writing all those years.” 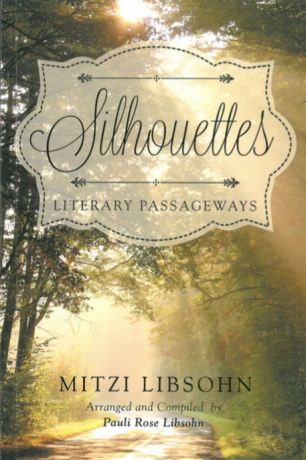 Libsohn’s newest book, “Silhouettes: Literary Passageways,” combines these carefully composed handwritten essays about the books and poems she read throughout her life, all continuing the central theme of love seen in her poetry.

“The one theme that runs through it is love,” Libsohn said. “She always wrote about love. Every single thing has to do with love. There’s nothing else in here except love, and that’s what she was about. That’s what interested her.”

All Libsohn’s works are available on Amazon.