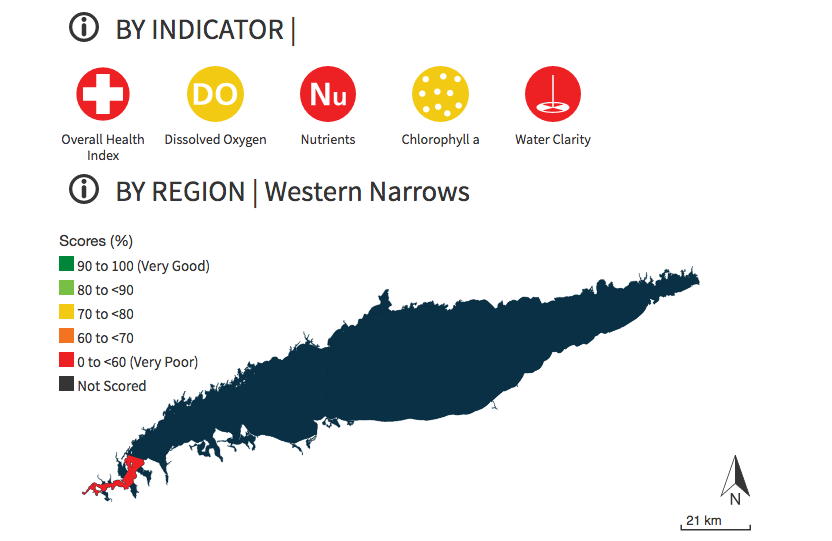 The quality of the water in Long Island Sound near Port Washington, Manhasset and Great Neck received an F rating in a report card released last week by Save the Sound, a program working to preserve the Sound.

The report classifies the area as the Western Narrows, stretching from New York City to Sands Point, and said it “is affected by the highly populated suburban-urban communities surrounding New York City, and received a very poor grade.”

The overall health index, nutrients and water clarity all received a rating of 60 or below. The dissolved oxygen and chlorophyll a received a grade between 70 to 80.

“I thought the community was making progress cleaning up the Sound,” Port Washington North Mayor Bob Weitzner said. “This is very disheartening to see we’re not. We need to turn this around and figure out what’s going on and whether it’s dumping or boating.”

According to the report, the Western Narrows “is shallow, has a high tidal range, but the flushing is fairly inefficient between the East River and the rest of Long Island Sound.”

The bottom of the Western Narrows, the report said, is a muddy area that’s highly contaminated from industrial activity, and there are “chronic dissolved oxygen problems.”

“The pollutant of greatest concern is definitely nitrogen,” said Tracy Brown, the director of the western sound program at Save the Sound. “It’s grouped into the failing amount of nutrients in the water.”

“As a waterfront community, preserving our precious water is naturally a key priority for Manorhaven,” said Jim Avena, the village mayor.   “We will continue to work with environmental and other community leaders on ways in which our village can help to reduce polluted storm water runoff and otherwise lessen the amount of pollutants entering our waterways.”

The Village of Great Neck mayor, Pedram Bral, said he and his trustees will review the report and meet about the results and see what can be done to find solutions.

Installing a rain barrel, eliminating or reducing fertilizer use and developing a neighborhood smart growth plan are ways to improve the health of the Long Island Sound, according to the report.

It also lists properly disposing of chemicals and composting food and yard waste and keeping litter out of waterways as effective methods.

The Eastern Narrows section of the Sound received a C-, while Western, Central and Eastern received a B, B+ and A-, respectively.

“Smaller villages and towns can pass local ordinances that require property owners to maintain septic properly, which has been a big problem over the years,” Brown said. “You’re supposed to pump out septic systems every three to five years, and not everyone follows that. A lot of them go unmaintained and homeowners don’t even realize it.”

Weitzner said if the problem is coming from upstate and coming down to Long Island, all of the villages and other municipalities need to get on board to fix the problem.

“We need to get together and do a study and determine what is wrong,” he said. “This is a treasure and a natural resource that’s vital.”

Attempts to reach other village mayors in Port Washington, Great Neck and Manhasset were unavailing.