Rocco Fazzolari, a Manhasset Hills resident and former union president, was sentenced on Monday to 37 months in federal prison for embezzlement and kickback schemes.

In a news release, Geoffrey Berman, U.S. attorney for the Southern District of New York, announced that Fazzolari was sentenced for embezzling from United Industrial and Service Employees Union Local 122 and his involvement in a kickback scheme.

“Rocco Fazzolari abused his position as the president of a labor union, taking more than $1 million through embezzlement and kickback schemes,” Berman said. “Most of this money was taken from an employee benefit plan, which was established to provide medical care for union members.

“For his crimes, he is now headed to federal prison,” Berman said.

He admitted to participating in a kickback scheme with Acclaim Administrators Inc. that saw over $1 million funneled through the company and back to him, according to court filings.

“From at least in or about 2012 through in or about June 2016, Fazzolari repeatedly used union funds to pay for his personal expenses, including payments for spa treatments, a gym membership, a second car, medical expenses, dues for an actors’ union, personal credit card charges, and ATM cash withdrawals,” a statement from the U.S. attorney’s office said.

In addition to his prison term, Fazzolari was ordered to serve three years of supervised release, to forfeit $941,828 and to pay restitution of $1,288,810.75, according to court filings. Under the terms of his plea agreement, he has agreed to a 13-year ban from labor union activities.

Editorial: Be careful for what you wish with tax cap
Next Article 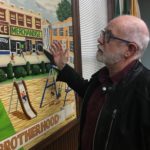