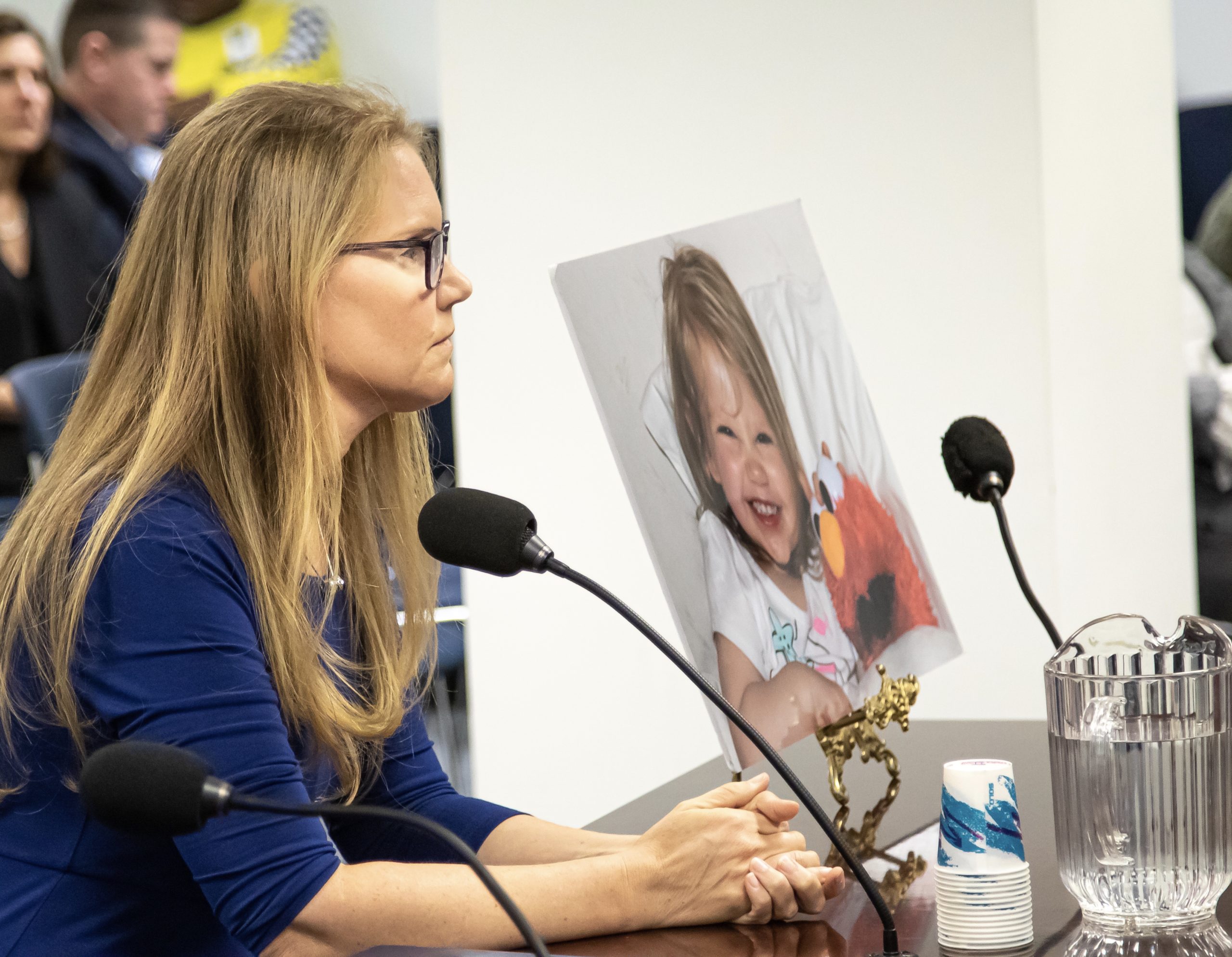 Jacqueline Franchetti testifies before the New York State Assembly's Judiciary Committee on Oct. 24. Her daughter Kyra, who was killed by her own father in 2016, is pictured to the right. (Photo by Marc Lanzkowski)
In the summer of 2016, Kyra Franchetti was killed by her father at his home in Fairfax, Virginia. The sleeping girl was shot twice in the back before her father set the house on fire and shot himself to death.
Kyra, who was on an unsupervised, court-sanctioned visit at the time, was 2 years old.
Three years later, Kyra’s mother, lifelong Manhasset resident Jacqueline Franchetti, has been advocating for considerations of child safety in Family Court proceedings.
Last year, Franchetti assisted in garnering support from Long Island legislators in Congress for the passage of House Resolution 72, which calls for hearings on the practices of Family Courts, says that evidence of abuse can only be submitted by an approved fee-paid professional and that states should have clear standards for the professionals, among other things.
She met with U.S. Representatives Tom Suozzi (D-Glen Cove) and Peter King (R-Seaford), and saw the passage of the resolution in the U.S. House of Representatives in October 2018.
“It was the first time in 30 years that Congress acted on the family court system,” Franchetti said.
On Thursday, Oct. 24, Franchetti told Kyra’s story in Albany, testifying before members of the state Assembly’s Judiciary, Social Services, and Children and Families committees in a joint hearing.
“They’re recognizing that legislative changes are needed to protect our children,” Franchetti said.

Franchetti also gave recommendations based on her experiences in Family Court, where she and Kyra’s father fought over custody for years. First and foremost, Franchetti says, a child’s safety must be made a top priority in custody cases.

“It is common sense, but somehow not a practice,” Franchetti said. “Some may say that it’s a matter of the child’s best interest, but that’s still not putting a child’s safety first.”

Second, according to Franchetti, training for all involved must be enhanced across the board.

“[Child Protective Services] noted that [Kyra’s father] had anger and rage issues, that he had an inability to care for her,” Franchetti said. “The forensic evaluator for our case still said in his report that the situation was ‘low risk.’ There’s no transparency, no accountability, nothing states what specifically should go into this report.”

Training would also be necessary for judges, she says. Franchetti recalls that during her time in court, at one point Nassau County Family Court Judge Danielle Peterson told her to “grow up.”

“The judge also said, ‘this is not a life or death situation,’ and she was wrong,” Franchetti said. “Because of Judge Danielle Peterson, Kyra will never grow up.”

Peterson and the Nassau Family Court did not immediately respond to a request for comment via fax.

Lastly, Franchetti says that accountability and transparency must be present in the family court system.

“Everyone in Kyra’s case – the judge, the forensic evaluator, Kyra’s attorney, who refused to take necessary steps to protect her – is still practicing today,” Franchetti said.

“Assemblyman Dinowitz promised to make changes, and that is a wonderful step forward for us,” Franchetti said.

For parents who are now in the situation that she was in 2016, Franchetti recommends further action.

“The system right now is set up to protect the abuser and not the child, and it is the scariest thing to go through this way,” Franchetti said. “The only way is to pass legislation. Pick up the phone, call your state senator or assemblyperson, and tell them it’s time to protect our children.”

Franchetti says Kyra was a “silly, happy, giggly, fiercely independent” girl who used to play at Mary Jane Davies Green in Manhasset and in the parks of Port Washington, where Franchetti worked. The last day they were together, she says, Kyra had learned how to roll down a hill.

“She looked at me and said, ‘I did it, Mama,'” Franchetti said. “I miss her every second of every day.” 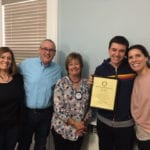 Roslyn Rotary names Student of the Month for November
Next Article

Upcoming at the Hillside Library