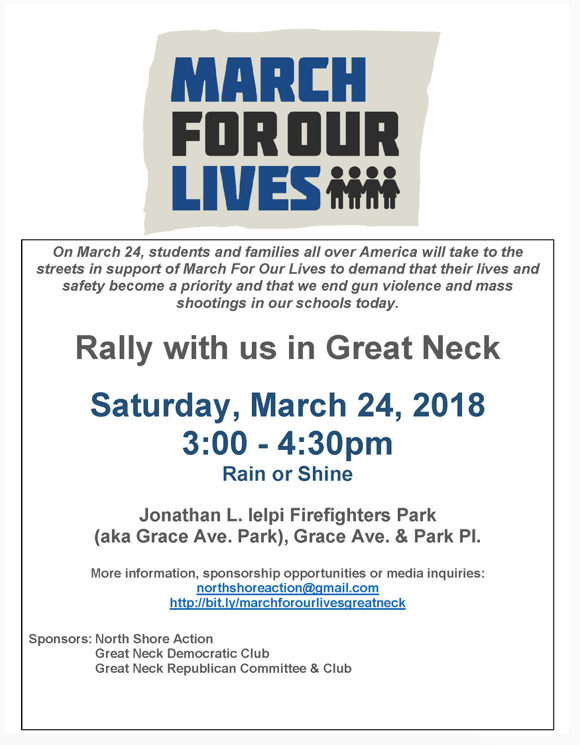 A flyer for the scheduled March for Our Lives rally in Great Neck on March 24. (Photo courtesy of North Shore Action)

North Shore Action, joined by the respective Great Neck Republican and Democratic Clubs and Committees, are sponsoring the rally in conjunction with the nationwide March for Our Lives movement in hopes of sending a bipartisan message to Congress.

Other sponsors include the Interfaith Community Action Committee of Eastern Queens and Western Nassau County, Reach Out America, Samuel Field Y, All Saints Episcopal Church/Great Neck Episcopal Ministry, as of March 19, according to North Shore Action.

Marc Katz, the head of the Great Neck Republican Club, said the issue of gun reform and making sure students are safe in school should be something anyone can get behind.

“It is a tragedy for all Americans, regardless of political party,”  Katz said on Thursday. “And that’s why people are coming together to do something about it.”

The rally comes on the heels of the March 14 student walkout, where students across the country and the North Shore stepped out of class to protest gun violence and remember the 17 people gunned down by a former student of Marjory Stoneman Douglas High School in Parkland, Florida.

Steve Markowitz, the head of the Great Neck Democratic Club, said this movement has a core of articulate students – even younger than those who protested the Vietnam War in the 1960s – taking action on “tangible” bipartisan issue that is easy to understand.

Markowitz said that while he’s not so sure about the prospects for change on the national level, he believes the rallies will likely help inspire new laws at the state level.

“We are horrified by the fact that the gun situation in this country has gotten out of control,” Markowitz said.

North Shore Action representatives said that students from both North and South High School will speak at the rally, as will Superintendent of Schools Teresa Prendergast. Elected officials, politicians, teachers and clergy have also been invited to attend.

Rabbi Gordon Yaffee of the Little Neck Jewish Center is also listed as a speaker.

Editor’s note: This article was updated to include more sponsors and a list of planned speakers at the rally. It will continue to be updated as more information becomes available. 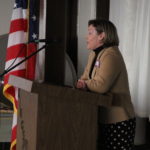 USMMA alums to aspiring women mariners: go forth and conquer
Next Article 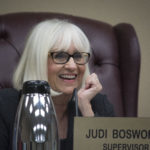