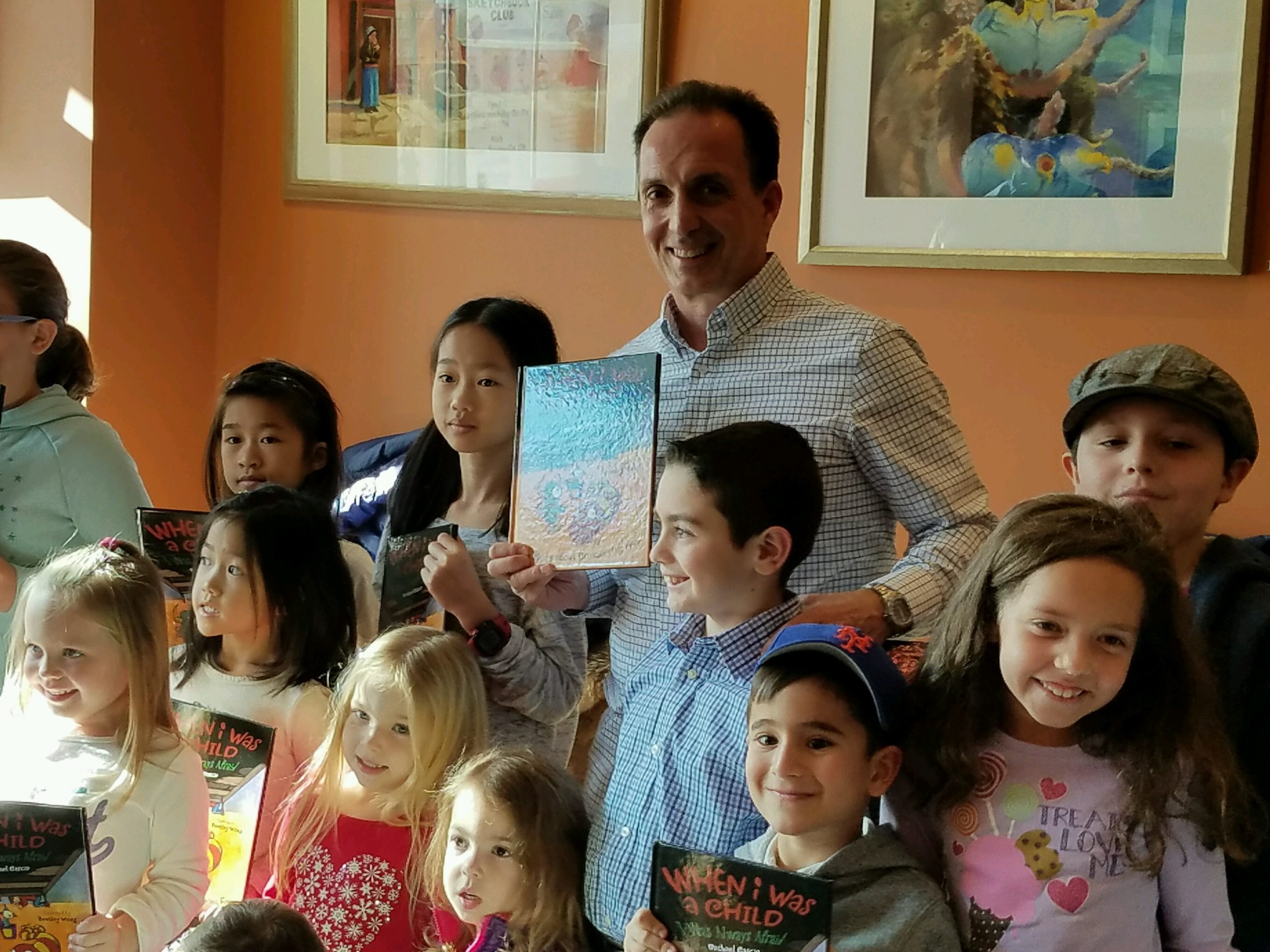 Michael Cascio of New Hyde Park appears at Dolphin Bookshop in Port Washington to read his new children’s book, “When I Was a Child I Was Always Afraid."

Whether it was the police sirens outside his window or the bully down the block, Michael Cascio struggled with fear when he was growing up in Bushwick, Brooklyn, as most children do, he said.

“He came here with the dream of providing a better life for us,” said Cascio, a New Hyde Park resident. “When these things would happen my father wanted to make sure that we would not go through life challenged because of things that worried us.”

Michael Cascio taught that lesson to his three children by reading them a poem he wrote whenever they got scared, he said.

Now, he hopes to do the same for children across the country with his new book, “When I Was a Child I Was Always Afraid,” an illustrated edition of the poem published Tuesday by Mascot Books.

An accountant with his own Queens-based firm, Cascio got a love of writing from a fourth-grade teacher, he said.

Cascio grew up in a typical Bushwick row house, the son of Santo and Angelina Cascio, he said. He went to elementary school at St. Joseph’s Patron School, where he found himself in Josephine Pilla’s classroom at age 9, he said.

Pilla made Cascio sit in the front row every day and took time to read Dr. Seuss books to him, he said. That was especially important because his family rarely had time to help him improve his reading skills, he said.

“I’ve always esteemed teachers very highly, but she was one of the key people that bumped into my life to make my life … and eventually my kids’ a lot better because she put me on the right track,” Cascio said.

The poem that became “When I Was a Child” follows a young boy who is afraid of noises he hears under his bed and in his attic until his father shows him that they’re nothing to be afraid of.

Cascio wrote the poem in 2000, when his oldest son, Michael, was in third grade, he said.

When he visited his son’s class at the Manor Oaks School in New Hyde Park that school year, the teacher, Kim Stromstedt, encouraged him to read the poem to the class.

Stromstedt was so impressed with poem that she has invited Cascio back to read it every year since, she said. She also connected him with another teacher at the school to help get it published.

In November 2015, the younger Michael Cascio took the poem to his friend and fellow New Hyde Park Memorial High School graduate Bentley Wong, a web designer and illustrator, to create images for the book.

Wong made darker, scarier imagery to accompany the first half of the book and brighter colors in the second half after the boy’s father appears, he said.

“I think it’s a story that any child can identify with,” Wong said. “Every kid at one point has pretty irrational fears and if it’s not specifically a father, there’s always a parental figure there in someone’s life that kind of guides the way and shows the light beyond the trees.”

Stromstedt, now a second-grade teacher at the Garden City Park School, said the story teaches children the importance of taking risks and facing fears, which help foster confidence and growth.

At the Garden City Park School, where 27 percent of students qualify for free and reduced-price lunch, children also identify with Cascio’s personal story of his working-class upbringing, so they know he empathizes with them, Stromstedt said.

“It shows the kids that dreams really do come true and … adults can learn and achieve dreams too, and you’re never too old to learn or do something new,” she said.

Cascio hopes to get the book into libraries and major bookstores, he said. He read it at an event at the Dolphin Bookshop in Port Washington last month that drew at least 70 people, he said.

Cascio has some other book projects in mind, he said. One is a Christmas children’s book also based on his Bushwick childhood. He also hopes to finish his father’s life story, which his father started writing before his death of stomach cancer in 2010.

“The fabric that we’re made of is what we become and, if we’re given a chance to lead our lives in a good way, is what we share with the world,” Cascio said.

“When I Was a Child I Was Always Afraid” is available for purchase on Amazon.com.