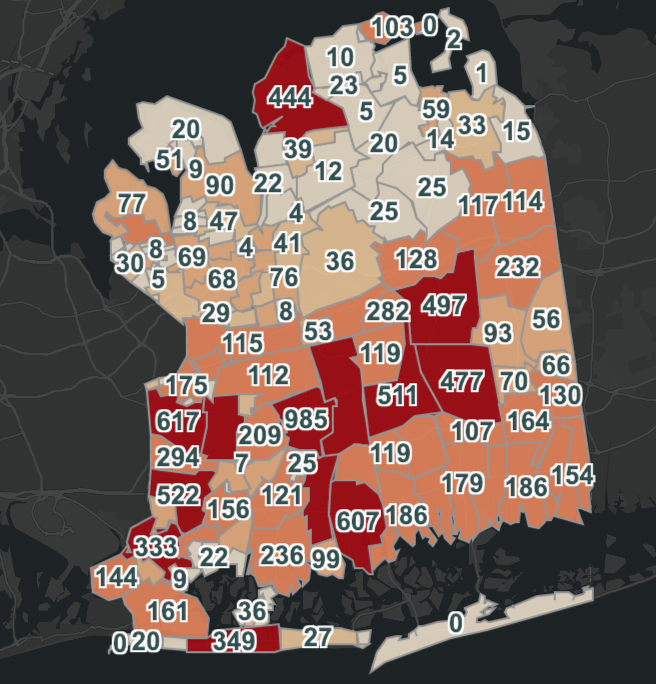 According to data provided by Nassau County, more than 2,300 people throughout the North Shore had tested positive for the coronavirus as of Monday. (Photo courtesy of the Nassau County Department of Health)

Areas governed by the Town of North Hempstead: 25

Areas governed by the Town of North Hempstead: 69

Areas governed by the Town of North Hempstead: 96

*=each municipality was counted once, despite some appearing in more than one area.

Metropolitan Transportation Authority employees will receive priority access to free evaluation, care, and testing throughout 52 Northwell Health locations in the midst of the coronavirus pandemic, according to a Wednesday press conference.

Under the new partnership, between the MTA and Northwell Health-GoHealth, Urgent Care will provide priority testing to symptomatic transportation workers at a rate of up to 50 tests per day or 350 per week, according to a release sent out by the transportation agency.

“This helps expand the options to our employees, giving them another avenue of support aside from their primary care physicians and health care providers,” Metropolitan Transportation Authority CEO Patrick Foye said.

Foye said transit authority employees are also permitted to receive complimentary evaluations and testing through their own doctors’ facilities.

Foye noted that Northwell already provided the complimentary service for police officers and firefighters and called it “fitting” that transportation employees received the same treatment.

“Since the COVID-19 pandemic began in the United States, the MTA has been leading the charge nationally when it comes to crafting a comprehensive response,” Foye said. “No transportation agency and the country is acting more quickly or more aggressively than the MTA.”

Since March 1, according to the release, the agency has distributed millions of pieces of personal protective equipment, including 2.7 million pairs of gloves and nearly 750,000 masks to protect its employees.

Northwell Health CEO Michael Dowling touted the work of Foye and the transportation authority and said he was pleased to begin the partnership between the two entities.

“This is a wonderful partnership, we are delighted to have the opportunity to work together with the MTA to make sure their employees get the appropriate services and the appropriate testing.”

According to the release, Northwell Health-GoHealth will begin reaching out to transit workers that self-identified as symptomatic to the agency’s COVID-19 hotline. Appointments will be arranged for a range of comprehensive medical exams and diagnostic tests, including testing for the coronavirus beginning Friday.

“Our relationship with the MTA is a mutually essential one and we look forward to partnering together in the days and weeks to come to make sure that MTA workers can get tested at our more than 50 urgent care locations around the region,” Dowling said.

Town of North Hempstead officials announced Monday the postponement of Spring Fest, Asian American Festival and the Memorial Day Commemoration and Fireworks until 2021 due to the ongoing spread of the coronavirus.

“Nothing is more important than the safety and well-being of you and your loved ones,” Town of North Hempstead Supervisor Judi Bosworth said in a statement. “We care deeply about our residents and want to ensure that we protect the health and welfare of everyone in North Hempstead. We look forward to these events returning again in the future and seeing everyone there happy and healthy.”

According to the Nassau County Department of Health, the number of confirmed coronavirus cases in the county had reached 25,250 as of Tuesday night.

There have been a total of 1,001 county residents who have died as a result of the coronavirus, according to the department.  The figures also show that 2,477 people have been hospitalized in county facilities from coronavirus-related illness. Among those 2,477, 503 are on ventilators.

Though 592 county residents live in intensive care unit facilities, according to the figures, 132 people had been discharged from hospitals after being admitted for coronavirus-related symptoms as of Tuesday night.

On Friday, Nassau County Executive Laura Curran extended the local state of emergency that was in place since she first declared the act March 13.  The state of emergency extension went into effect Sunday, and will be enacted throughout the county for the next 30 days.

Curran said the county has moved proactively to mass testing for first responders, including testing for antibodies for those who have recovered.

She said the antibody testing cannot move forward until those tests are approved by the FDA and the state’s Department of Health. When those approvals come, Curran said, the tests will start to gradually roll out, still prioritizing first responders and healthcare employees.

Gov. Andrew Cuomo said Monday he believes “the worst is over” if New Yorkers continue to adhere to social distancing and government-mandated safety precautions.

“I believe the worst is over if we continue to be smart,” Cuomo said during a press conference. “I believe we can start on the path to normalcy.”

The six states together have recorded more than half of the confirmed virus cases in the United States and around 60 percent of all deaths, according to data compiled by The New York Times.

The newspaper said a total of 202,208 New Yorkers had tested positive for the coronavirus as of Tuesday.  More than 10,000 people had died from the coronavirus in New York, according to The Times.