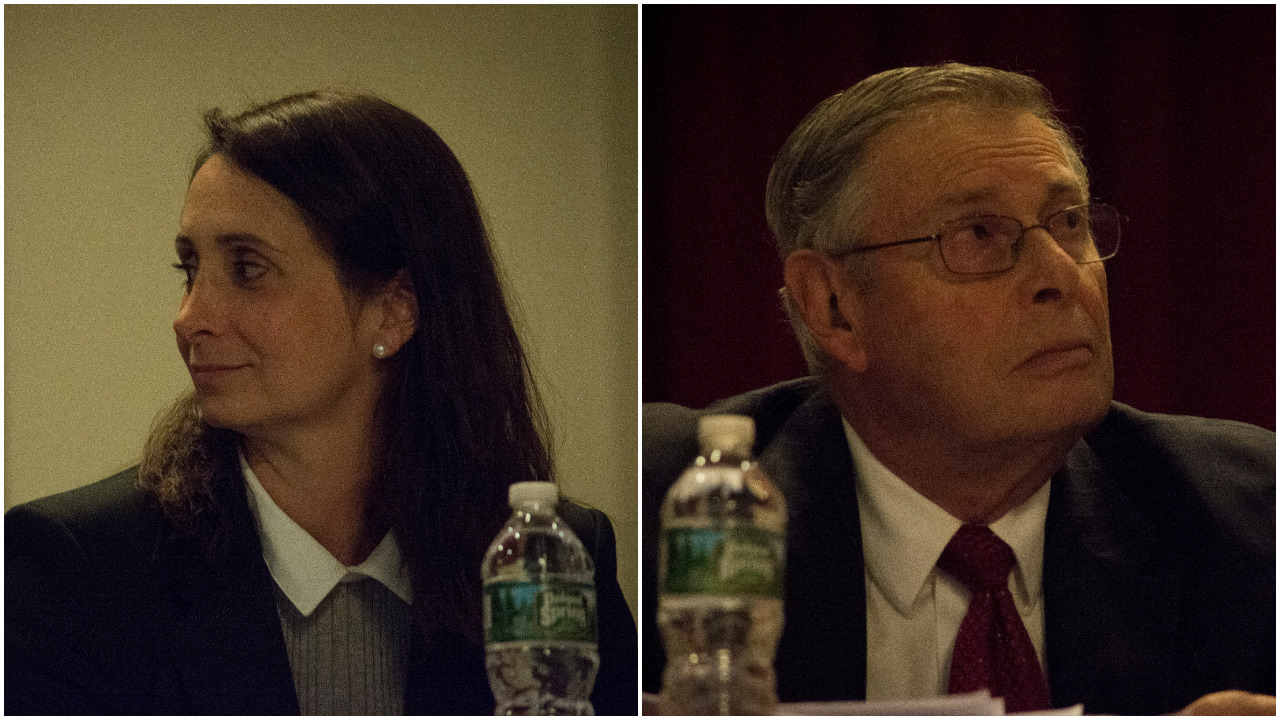 Tina Stellato, left, and Daniel Nachmanoff, right, are battling for a seat on the Great Neck Park District's Board of Commissioners. (Photos by Janelle Clausen)

It was a dispute over happiness and qualifications between Great Neck park commissioner candidates Dan Nachmanoff and Tina Stellato on Thursday night, with the two sparring over issues ranging from programming to each other.

The election for one seat on the three-member Great Neck Park District Board of Commissioners will be held on Tuesday, Dec. 12.

Nachmanoff debated Stellato’s qualifications for the job, outlining his experience as the mayor of Russell Gardens, leading the Great Neck Village Officials Association, working under then-County Executive Tom Suozzi as a director of intergovernmental relations and his two terms with the Great Neck Park District.

Stellato described herself as having the right experience for the job, having been at Parkwood Tennis Center as a professional tennis instructor and scheduler for 17 years, a registered Realtor with negotiating skills, retail manager and active member of the E.M. Baker Elementary School’s Parent-Teacher Organization.

She also said that, as a young parent, Park District worker and woman, she would offer a “unique perspective” that she would be eager to offer new programming.

“I feel there’s stagnancy on the board. We’ve had the same men in for quite awhile,” Stellato said, noting the service of Nachmanoff, Robert Lincoln and Frank Ciffulo. “We need new ideas, we need a fresh face, we need female representation.”

The responsibilities of the  Great Neck Park District Board of Commissioners include setting district policy, approving budgets, projects and contracts, overseeing park business and responding to concerns of residents.

Nachmanoff said that during his tenure, the Board of Commissioners has improved the infrastructure of the parks, doubled community involvement and added programs, all without raising taxes.

He also said that the Park District has run smoothly, that employees are paid well and that the district is among the top employers of people with special needs.

Stellato contested that, saying that she believes “the morale amongst Park District employees isn’t that great” and that putting caps on seasonal work could push skate and tennis instructors into leaving.

“That’s something that needs to be addressed,” she said.

Nachmanoff said that he does not believe that for a minute.

“Our staff – I won’t say they’re absolutely ecstatic, but they continue to work here, they continue to do a good job, they’re well paid for what they do,” he said. “As far as tennis instructors, who are outside contractors except when they work for the Park District, that’s another story. They can go here or they can go anywhere. We could replace tennis instructors.”

Stellato said that she thinks that “that attitude is part of the problem.

“We have a great deal of respect for our employees and that’s why they’re here,” Nachmanoff replied, before questioning Stellato how many tennis instructors left – to which she said “a few.”

“For me, the fact that you don’t even know that there’s this unhappiness among the employees just shows how uninvolved you are,” Stellato said. “That’s my opinion.”

Nachmanoff said that is false and that, based on his observations, “the people are as happy as punch.”

Both candidates expressed interest in the creation of a recreation center, but Nachmanoff noted that the board has been researching it and that there is not enough space at this time.

Both candidates also responded to a question about better lighting for the tennis courts and soccer fields. Nachmanoff said that the “village mayors don’t want it” because of concerns from neighbors. Stellato also said those kind of changes have not been allowed.

Stellato, who was asked to expand on her desire to “stand up” for children and grow programs for children with special needs, said she would try to make “Acing for Autism,” a tennis program she pioneered, a yearly endeavor, and try to institute a program like therapeutic painting at the Great Neck House.

Nachmanoff said that of the 80 programs the Park District has, 43 have been for children and that they “do not separate or segregate children” based on special needs. He also noted that the Park District has partnered with SUNY Cortland to understand what kind of programs would work and that he was particularly proud of a therapeutic skating program.

He also described Stellato’s promise to bring “more educational programs” to the Park District as being more “in the purview” of the schools.

“We provide training and support so that children can learn and improve and enjoy their recreational training. That’s what we are: a recreational organization,” Nachmanoff added.

Toward the end of the debate, when asked by resident Jean Pierce why the debate seemed to have focused so much on tennis, Stellato framed it as her point of reference and said that a lot of the questions were about tennis.

Stellato added that by “making blanket statements like that” he is “belittling” seasonal and part-time employees at the Park District.

“I find it disrespectful – completely disrespectful,” Stellato replied, to which some questioned how being a dentist, which Nachmanoff has been for decades, is relevant.

Nachmanoff said that as a mayor, he has done the job before and knows how to secure grants.

Stellato added that another “beauty of the job” is that there are two other commissioners that could assist her for anything she may not know and that she is “in good hands.”

“You’re in good hands all right – you are three commissioners, we need three intelligent, knowledgeable, experienced –” Nachmanoff began, before being cut off by audience clamor and Stellato saying he was implying she wasn’t those things. 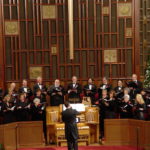