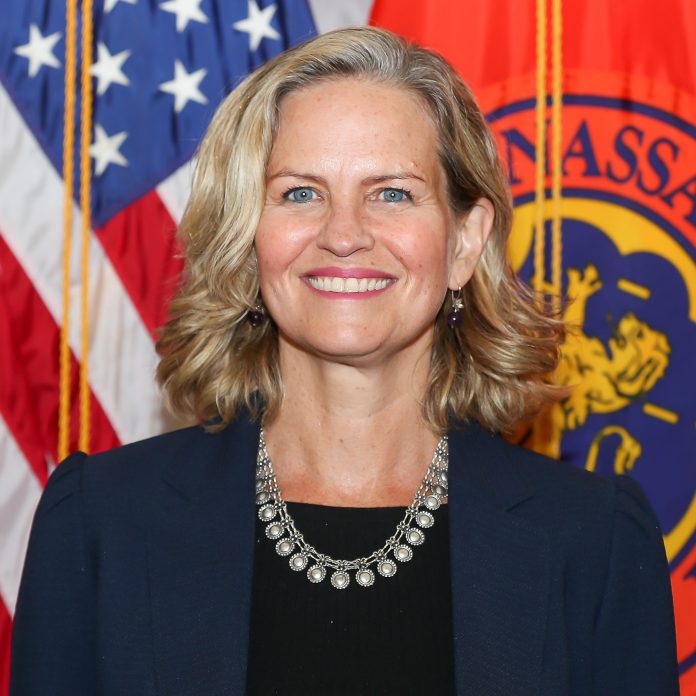 Nassau County Executive Laura Curran signed an executive order to adopt the official definition of anti-Semitism throughout the county. (Photo courtesy of the county executive's office)

Curran pointed to the growing number of anti-Semitic acts on a local and national level as the main reason to adopt the definition, which was established in 2016 by the International Holocaust Remembrance Alliance in Bucharest, Romania.

“With Anti-Semitism on the rise, Nassau County stands with our Jewish brothers and sisters and will continue fighting to ensure hatred never finds a home in our communities,” Curran, a Democrat, said in a statement.

The alliance’s definition calls anti-Semitism “a certain perception of Jews, which may be expressed as hatred toward Jews. Rhetorical and physical manifestations of antisemitism are directed toward Jewish or non-Jewish individuals and/or their property, toward Jewish community institutions and religious facilities.”

The Town of North Hempstead adopted the definition in February after a handful of anti-Semitic attacks that occurred throughout North Shore community over the past year.

The event was promptly ended, according to the statement, and the police were contacted to investigate.

Officials said that they did not believe Temple Beth-El, located at 5 Old Mill Road, was a target for any specific reason other than its role as a Jewish temple. Officials said they are working with the temple’s security consultants to ensure such incidents do not occur again.

“As Jews, we have experienced hatred and anti-Semitism in our history … and we know the importance of being strong and proudly standing up in our own defense,” the temple officials’ statement said. “While there will always be moments of darkness and acts of evil, our community will stand united, strong and never bend to intimidation. May we continue to go from strength to strength.”

Pictures and videos from StopAntisemitism.org, a nonprofit that draws attention to anti-Semitic attacks and rhetoric, were posted on Dec. 14. The video featured the home page of the school’s website with Nazi soldiers marching in the background.

PAL Executive Director Rob Elkins said the vandals found a can of red spray paint in the clubhouse and sprayed swastikas “all over the inside of the building, on-field equipment, on balls and bats, on the bathroom walls, on our tractor and on the front door to the building.”

More recently, State Sen. Anna Kaplan (D-North Hills) received a piece of hate mail with explicit, insulting language and an anti-Semitic reference several weeks ago in response to one of her mailers with information on the coronavirus vaccine.

Kaplan posted a picture of the hate mail, which was written on the mailer providing Nassau County residents with vaccination information. The sender criticized the literature and called Kaplan “stupid,” “dumb” and “evil,” along with a profane insult.

The sender also wrote “109 soon 110,” a phrase the Anti-Defamation League said is used by white supremacists referring to the number of countries that have expelled Jews, implying the United States would be the 110th to do so.

“As a former religious refugee who fled anti-Semitism in my birth country, I have seen first-hand how anti-Semitism begins to permeate a society and ultimately lead to violence against Jewish people,” Kaplan said.