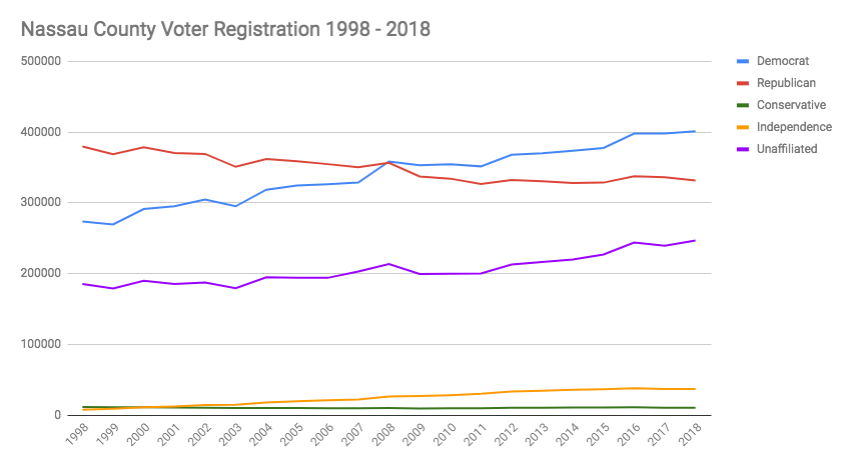 Data from the New York State Board of Elections shows that Democrats have made considerable gains in the last 20 years. (Chart by Janelle Clausen)

Once Nassau County Republicans were known to hold supermajorities in the County Legislature, a 3-2 voter registration advantage, the county’s state Legislature delegation, and the position of county executive far more often than not.

Today the entire state Senate delegation for Nassau County is blue. Laura Curran, a Baldwin Democrat, is the county executive and former Long Beach City Manager Jack Schnirman is the county comptroller. And while Democrats do not control the County Legislature, they outnumber Republicans at the ballot box.

In the same period, Democrats have been ascendant. In 1998 there were 273,733 registered Democrats. That number has ballooned 46.56 percent to 401,196 as of Nov. 1 this year, voter registration statistics show.

Lawrence Levy, dean of the National Center for Suburban Studies at Hofstra University, said the changes can be explained by two things: the damaged brand of the Republican Party and a surge of immigrants to Long Island replacing older voters.

“The numbers are very stark and if the Republicans are to have any chance of mounting a comeback, they’ll need a whole new suburban strategy that is much more moderate and focused on not just cutting taxes and services, but responding to the needs of people,” Levy said.

Asked about Democrats outpacing Republicans in voter enrollment, Joseph Cairo,  chairman of the Nassau County Republicans, said: “We have to work harder to deliver our message to Republicans moving to the county and try to reach out to others. I think the independents, those who do not have party affiliation, they have become more and more of a factor over the years.”

“We have to show our records and intentions and initiatives and appeal to the independent voters,” Cairo said.

In the same period, Levy said, minorities – known to lean toward the Democratic Party – have migrated to Long Island in search of opportunities.

“There’s been a surge of new immigrants and other minorities who are replacing the older white voters who were reliably Republican,” Levy said. “And these new voters are bringing their Democratic voting tendencies with them.”

The rate of growth for people identifying solely as black or African-American has been a bit slower. There were 135,764 African-Americans in Nassau County, the 2000 census found, and 155,583 in 2016 – raising their share of the population from 10.15 percent to 11.5 percent.

Two and four-tenths percent of people in the 2010 census identified with two or more races.

“This is a once or twice a century phenomenon that is related to economic and geopolitical influences that don’t come along very often,” Levy said of the shift.

Asked if local corruption – such as the indictment Nassau County Executive Edward Mangano on federal corruption charges or the conviction of former state Senate Majority Leader Dean Skelos – played a role in recent wins, Levy pointed to the demographic changes.

“The demographic destiny that we saw manifest itself was in play long before,” Levy said. “This was going to happen eventually, simply because of the change in population. There are simply too many Democrats moving to Long Island at a time the [Republican] Party is ill-equipped.” 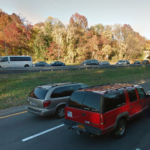 Work likely for Northern State Parkway next year
Next Article