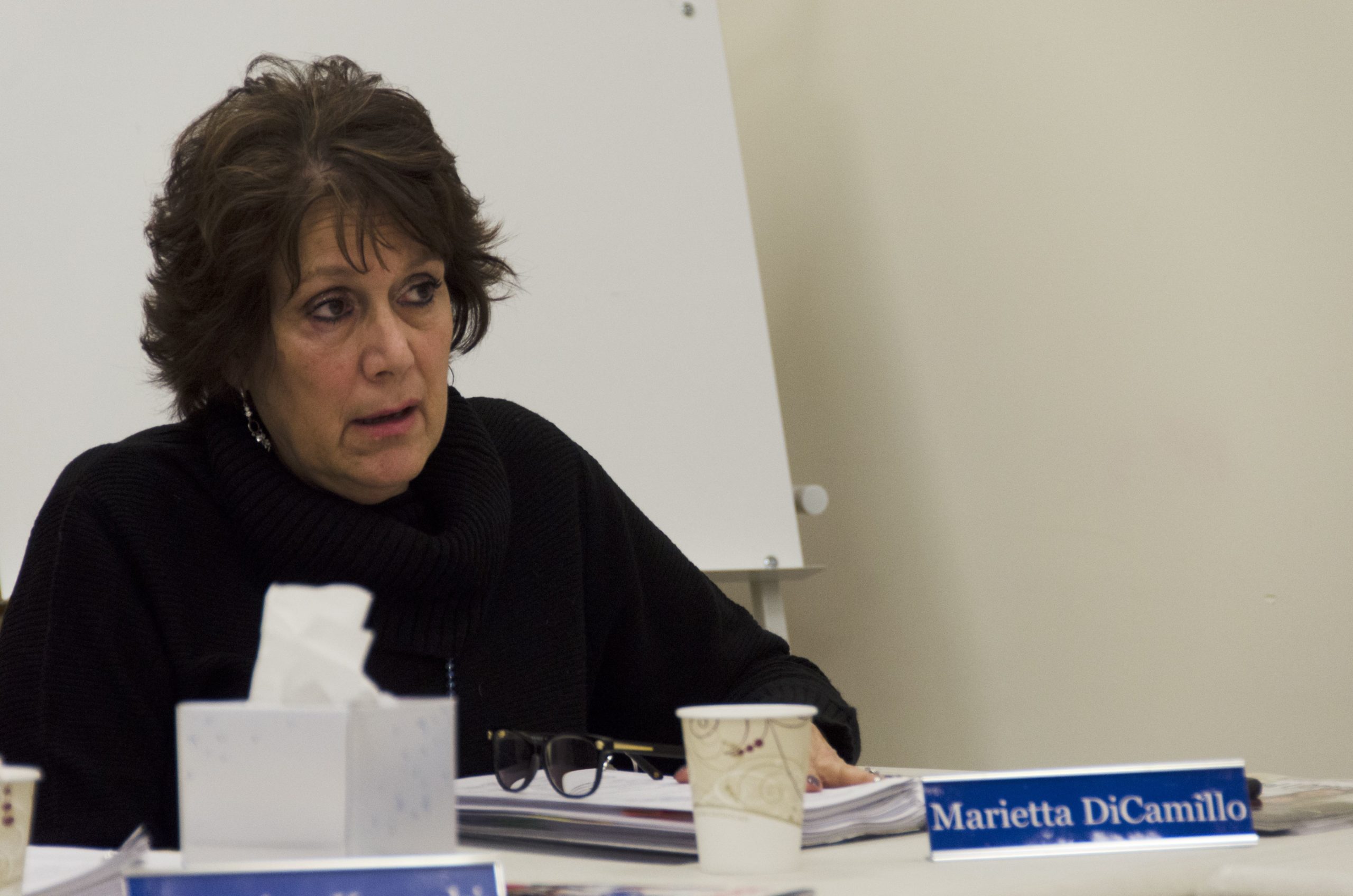 Marietta DiCamillo, treasurer of the Great Neck Library Board of Trustees, speaks at a meeting on March 21, 2017. (Photo by Rebecca Anzel)

The Great Neck Library Board of Trustees unanimously voted Tuesday to start the bidding process for a landscaping project at the library’s newly renovated Main Building.

The plan also includes a children’s educational garden dedicated to Ann Hyde, who visited the library when she was a child and left money to it when she died in June 2014.

“It’s really going to be quite dynamic, I have to say, and a major improvement over what it looks like currently,” DiCamillo said.

The plan is the finishing touch to the two-year renovation of the Main Building, which reopened on Oct. 25. The library has seen an increase in visitors since that date, Kathy Giotsas, the executive director, said.

The landscaping plans are displayed at the building for library patrons to get a sense of the project, Schaufeld said.

Until the board receives bids and hires a company, it is unclear when the landscaping work will begin, how long it will take and what the project will cost.

According to a budget variance report, the plans cost $30,450 for the architecture company to develop.

Other budget-related matters were mentioned at Tuesday’s meeting in preparation for a hearing on the library’s 2017-18 budget on April 4.

In addition to programming and new employment positions, the library’s potential newsletter redesign was also discussed.

Giotsas said she proposed budgeting an additional $12,000 per year for new paper to print the newsletter on because it would add color, better showcase content and enable staff to reformat it in a more visually appealing manner.

This change came after reviewing newsletters published by other area libraries, Giotsas said.

DiCamillo questioned the increase for the quarterly newsletter, currently printed on newspaper.

“We can get into that discussion about what other libraries are doing the day that they have four branches they have to sustain and the day that they’ve got a full teen center with professional lighting, et cetera,” DiCamillo said.

The board should consider a suggestion made at a previous meeting that the library publish the newsletter digitally to save on postage, DiCamillo said.

Also discussed Tuesday were suggestions to streamline programs held at the Main Building that make use of the facility’s new equipment.

A resident raised an issue at a family archaeology program Sunday that started late due to equipment problems.

A second resident said she had an experience with a program using the community room’s new screen and projector, which are set up in a way that is difficult for participants to view the entire screen.

Michael Fuller, the library board secretary, said he thinks a library employee trained on the equipment should be working when programs are occurring to help alleviate any further issues.