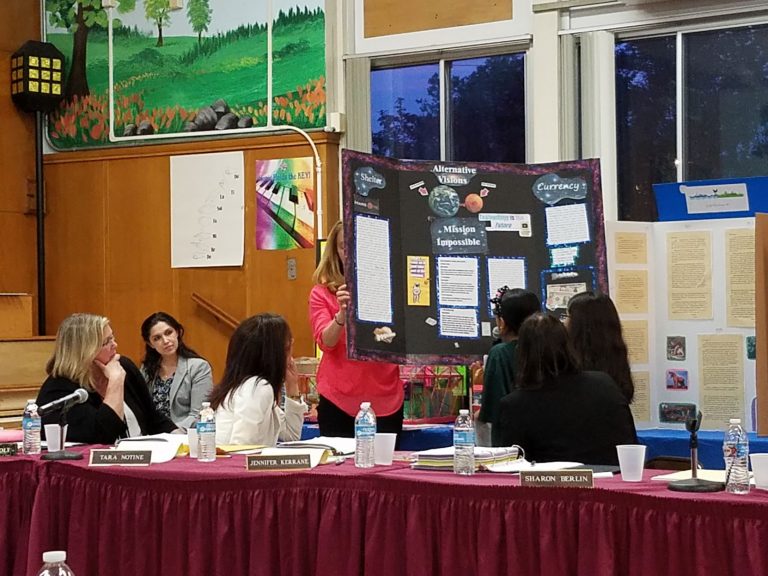 Sheila Bet, the founder of the New Hyde Park-Garden City Park School District’s Odyssey Program for advanced students, will be retiring after running the program for 19 years.

Bet said she has about 135 elementary students from throughout the district enrolled in the program this year, in addition to some from the Notre Dame School in North New Hyde Park.

She said fourth-, fifth- and sixth-grade students study topics such as literacy, mythology and the Constitution after going through a selection process that includes reading scores, cognitive scores and extensive teacher recommendations on each child.

Bet splits her time between the district’s four schools and pulls students out of their regularly scheduled classes for at least 90 minutes per week, she said.

Students can choose from a selection of various projects and topics, and in the past they have made PowerPoint presentations, created newspapers and performed puppet shows to demonstrate their learning.

“Some students have researched Shakespearean work and created dances,” she said.

Six of Bet’s students presented their projects to the New Hyde Park-Garden City Park school board on Monday after the district-wide Odyssey Fair was held May 23 at Manor Oaks School.

Garden City Park School sixth-graders Alicia Koshy and Ammondeep Kaur studied the U.S. Constitution and Paul Revere. They wrote a poem about his influence on the American Revolution and prepared slide shows, newspapers and reports for their class presentation.

The students also participated in “lively debates,” were “sworn in” as senators at New Hyde Park Village Hall and learned how to write a mock bill.

Fifth-grader Aria Sinha said her class studied Homer’s “Odyssey” and William Shakespeare. Sinha created a “Museum of Shakespearean Wonders” which included replicas of five of the playwright’s most famous relics, such as a folio of 36 plays published seven years after his death and a letter from his childhood friend, Richard Quiney.

“He was the most famous writer in the English language and he was an actor,” Sinha said.

O’Reilly said the students created “movement” games to prevent childhood obesity, as nearly one in five kindergartners across the five boroughs is considered obese. O’Reilly’s invention” was “The Sponge Fresh Solution,” to be used in combatting food and odors on sponges.

“People like to throw away their sponges after one or two uses,” O’Reilly said, which she called a waste of time and money.

Fourth-graders Chesna Chummar and Aralyn Geevarghese from Hillside Grade School depicted renditions of how they imagine life would be on Venus for humankind.

The fourth-graders read several sixth- and seventh-grade literature books about the moon and Mars, Chummar said.

“It is becoming increasingly difficult to live on Earth,” she said.