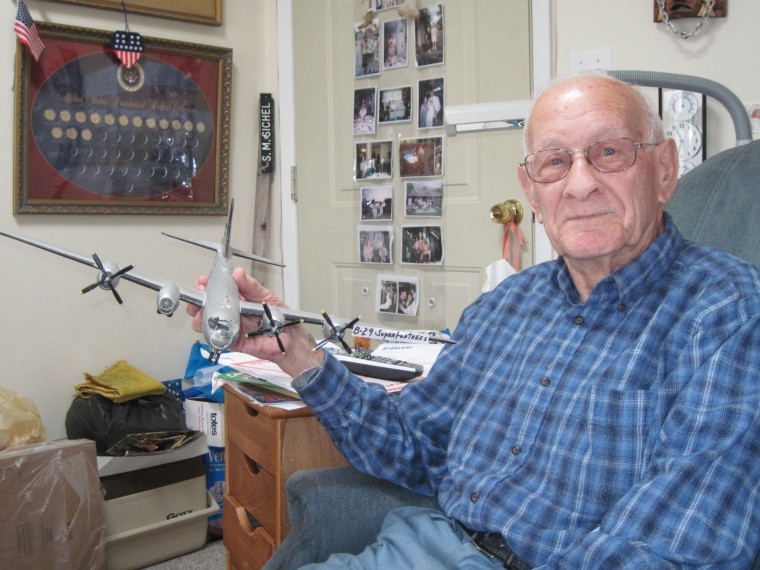 From the time he was a teenager, Stanley Sichel wanted to fly airplanes.

The 93-year-old veteran, a 57-year member of New Hyde Park VFW Post 8031, finally got his chance a couple of years after enlisting in the U.S. Army during World War II, flying a B-29 in missions over Japan near the end of the war.

When he initially enlisted in January 1941, it wasn’t likely that would happen. His service obligation would last a year, unless something changed. On Dec. 7, the world changed. As he and two friends stopped for coffee at a diner during a drive to report to Fort Bragg, they heard the news about the Japanese surprise attack on Pearl Harbor.

“All of us looked at each other and damn near fainted,” he recalled.

A sympathetic sergeant at Fort Bragg got Sichel transferred to the Army Air Corps, but when he subsequently went through the battery of requisite tests at a base in Nashville, he was pegged to be a bombardier.

“I was the saddest guy around. I wanted to fly,” he recalled.

For reasons he still doesn’t know, his assignment was changed to pilot and soon after he was training in B-17s and the much larger B-29s in Clovis, NM.

“I enjoyed it. I had no trouble learning to fly it,” he said.

Sichel always seemed to have good fortune while in the service. Recovering from a hand injury that kept him from flying for a few months in Clovis, he sign on to go up in a training mission as a passenger to recoup back flight pay. His captain told him not go on the mission. That plane was lost in a thunder storm and never returned.

After his lengthy training period, Lt. Sichel was finally given his own crew – five other officers and five enlisted men – and was ultimately shipped to Saipan as part of the 883rd bomber squadron in the 73rd bomber wing of the 20th Army Air Force to start flying missions.

“The plane I got was one of the oldest planes they had up there. But it flew good,” he recalled.

Good enough to see he and his crew through 18 missions of 25 they took off on, with mechanical problems forcing them to turn back several times. It was 15 hours round trip between Saipan and Japan, and most of the missions proceeded without incident, but there were a few close calls.

On a mission to drop incendiary bombs on Tokyo, Sichel dropped his bomber from its 20,000-foot cruising height to 7,000 feet over his target. He was aware of the danger because an air raid using incendiary bombs would produce a kind of firestorm that could produce treacherous fiery updrafts.

“With the thermals that come up from them, you could get caught up in it,” he said.

And that is exactly what started to happen that night, as Sichel frantically pulled back on his steering column to attempt to bring his plane out of the firestorm below. The B-29 was headed up at an extreme 80-degree angle. HItting a 90-degree angle would mean certain loss of control and a fallback into the conflagration below. At that moment, he said thought he was experiencing his last moments on earth.

“We felt we weren’t going to make it. We were lucky,” he said.

On another occasion, Sichel had nearly piloted his B-29 to the target when one of the plane’s four engines cut out. He hit the target and made an emergency landing on Iwo Jima, the halfway point between Japan and Saipan. And once, emerging from a thick cloud cover, he found himself staring at Mount Fuji and barely averted flying straight into it.

The other near accident he recalled was a nearly unsuccessful take-off from the rocky 10,000-foot runway on Saipan. He built up the plane’s speed to its normal pre-flight 180 miles per hour, but it wasn’t responding. As he reached the end of the runway, the plane started losing altitude, skimming along the narrow sandbar that led down to the ocean. He ordered his co-pilot to pull up the landing gear, preferring to bottom out on the belly of the aircraft if it came to that, and then suddenly, the plane rose gradually and he said he breathed a heavy sigh of relief.

On landing, the head of his maintenance crew pointed out that the propellers on his inboard engines – mounted lower than the outer engines – all have slightly inverted tips from skimming the water on the difficult take-off.

Sichel feels proud about his six months of flying missions from Saipan, but he recalls the mixed feelings he and his crew had about those missions over Japan.

“We felt good because we were keeping the Japanese from going out against us. We felt bad because of the people we were killing down them, that weren’t in the war. We felt had about that, but there was nothing we could do about it,” he said.

He also recalled viewing the unimaginable devastation over the city that had been Hiroshima during a mission the day after the first atomic bomb was dropped.

Since that time, he’s never flown again. He finished his high school degree when he came back – he attended Sewanhaka before enlisting – worked for 26 years for the Port Authority and raised a family.

And once each year, until recently, he’s revisited his memories of the Pacific War in reunions with his flight crew.