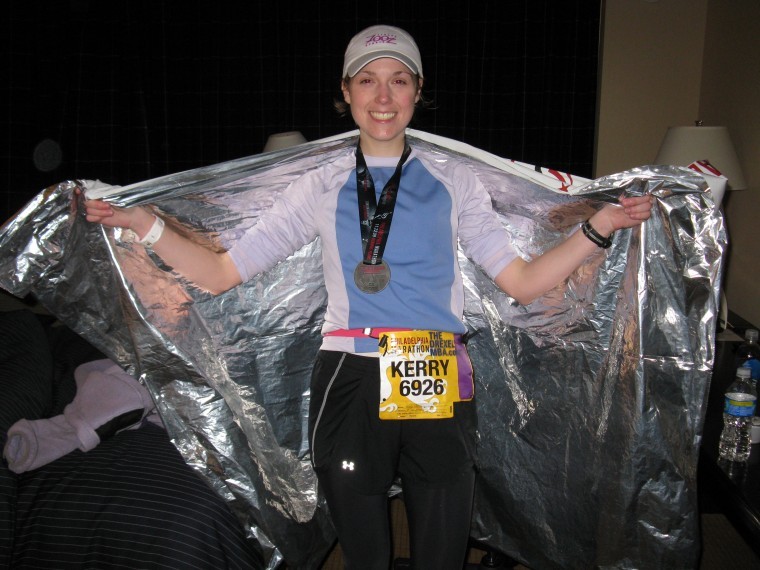 When Kerry Chu first set herself a goal of running a marathon, she wasn’t sure she could physically do it.

Chu recalled how the condition made it difficult for her to stand during her graduation ceremony at Providence College earlier that year.

Some months after the surgery, she gradually resumed the running regimen she had formerly maintained, and used the surgery as a motivation for a new goal.

And this Sunday, she’ll be running in the New York City Marathon to raise money for the American Syringomyelia & Chiari Alliance Project, a Long Island support group she currently leads as its chapter head.

“If I can survive brain surgery, I can run a marathon,” she told her then fiance – now husband – Bernard.

That moment came, along with the doubt that accompanied it, a few years after her surgery. In the interim, she hadn’t come close to running a distance that would lead to running 26 miles.

“As I was feeling better, I started a running a little more, but I never ran more than five miles,” Chu said

Two years ago, she received a flyer through the mail about running a half-marathon with a team in the Hamptons to raise money for the Leukemia Society and she thought it was a sign. She succeeded in running that race, and friends started teasing her about when she would attempt a full marathon. And she decided to set the bar higher for herself and take on that challenge

Her first race, the County Music Marathon in Nashville last year had a special meaning. It was a fundraising effort to combat a genetic disorder that afflicts her mother, Maureen, called Hereditary Hemorrhagic Telangiectasia (HHT), which causes abnormalities in blood vessels.

“Raising money for me is a motivation to help other people,” Chu said.

She raised $4,000 from sponsors for that effort. And Chu has already raised $4,400 for the American Syringomyelia & Chiari Alliance Project before she even steps off on Sunday by word-of-mouth and the ASAP contact list. So she seems poised to exceed her goal of raising $5,000 for the cause.

Meanwhile, since running in the Nashville, she’s warmed up for the Big Apple race with three other marathons, in Philadelphia last November, the national marathon in Washington, D.C. in March and the Hartford Marathon last month. So while running was a stress reliever for Chu in college, it is now a source of purposeful achievement.

“It’s definitely a great feeling. For me having the goals of helping others, it’s mentally uplifting,” she said.

In the context of helping others, her father, Dennis, who serves on the board of the HHT Foundation, is a power of example to her.

But she herself provides a powerful example to others. With a titanium plate and scar tissue in her head from the surgery, she feels pain with changes in weather.

On Sunday, Chu will be running for the support group that tries to make life better for people afflicted with the same debilitating disease she continues to overcome.