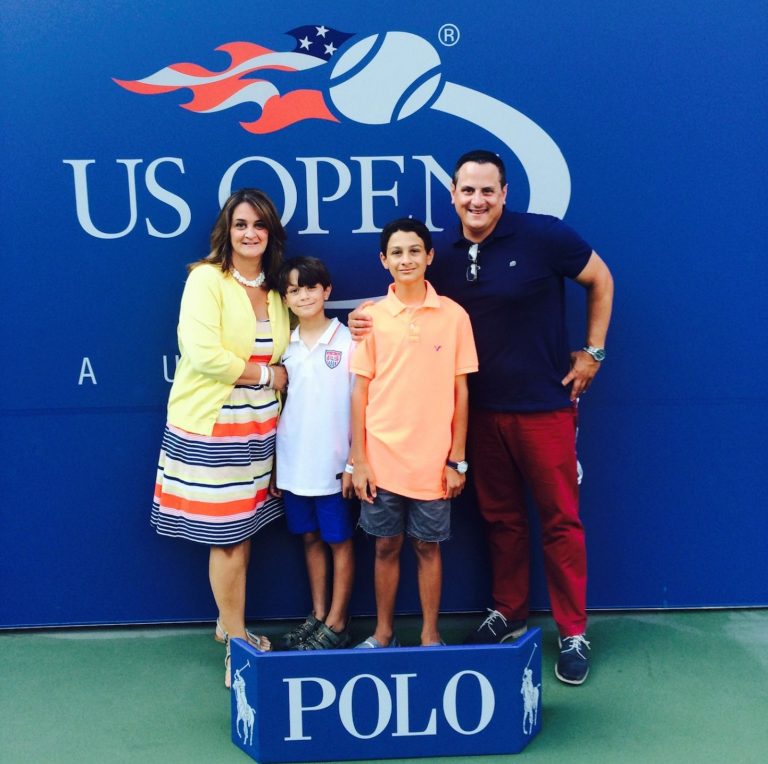 Benjamin Truncale III had sung once before between featured matches at the U.S. Open Tennis Tournament, but not before as many people as the standing-room-only crowd in Arthur Ashe Stadium between the first-found matches of Roger Federer and Serena Williams on Aug. 26.

“There were a lot more people,” said Benjamin, a 12-year-old  from Malverne whose father Ben is the village attorney for New Hyde Park and Stewart Manor. “I was nervous but I was also very excited.”

“It was fantastic,” said his father, who is also special attorney for the Village of Williston Park.

Benjamin, who sang “America the Beautiful” on both occasions, performed last year in front of a sparse crowd reduced by the threat of rain.

But singing in front of a packed stadium at the premiere venue of the U.S. Open Tennis Tournament is a different ball game entirely.

Since submitting an audition tape to win a spot singing on court for the second straight year, Benjamin had practiced for weeks before with a private vocal coach.

On the day of the performance, he arrived at the empty stadium hours before with his father, brother and mother, Teresa, to sing during a sound check.

Then with the stadium full, Benjamin moved courtside and performed.

“When I first started I got little nervous, but then I relaxed,” Benjamin said. “I was happy with my performance.”

Benjamin said he wasn’t a tennis fan before he began singing at the U.S. Open, but he said he’s begun to take an interest in it.

The Truncale family didn’t get to meet any tennis stars at the U.S. Open, but the elder Truncale said they saw former NBA star Michael Jordan and Fox News personality Sean Hannity in the crowd.

Benjamin has twice sung the national anthem before New York Islanders games in the Nassau Coliseum, the first time on Super Bowl Sunday last year and once again earlier this year.

He’ll be singing the national anthem at the annual Sept. 11 observance in Malverne.

Truncale said his son has been doing that for the past four or five years.

Three years ago, when his father was still assistant village attorney in Mineola, Benjamin wowed the crowd at the annual village Christmas celebration with striking a cappella versions of “Silent Night” and “Ave Maria”

He was in a community theater production of the “Addams Family” musical in Lynbrook. And he’ll be auditioning for a part in an upcoming youth production of “Les Miserables” at the John W. Engeman Theater in Northport.

“He likes doing it. He’s doing it for fun,” his father said.

“I’ve done musicals before, but ‘Le Mis’ is my favorite musical,” he said.