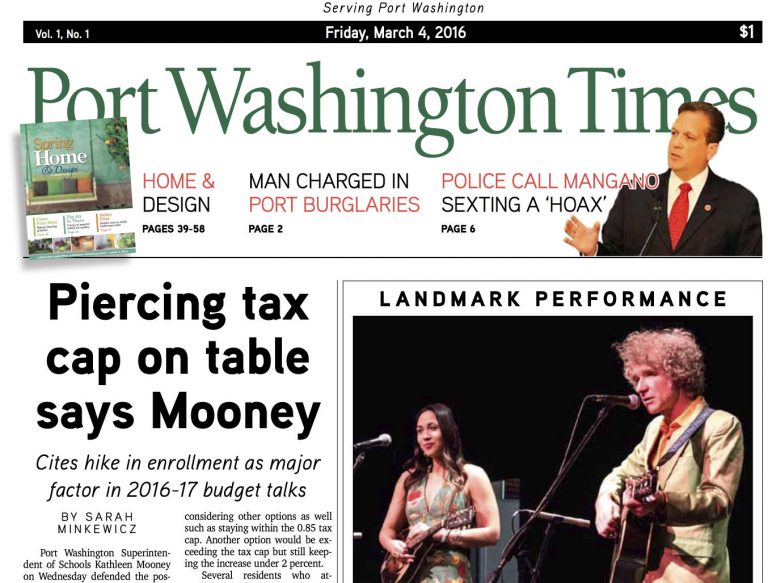 Between 1989 and 2006, Blank Slate Media Publisher Steven Blank grew two community newspapers in Queens into an award-winning group of 16 publications.

He came to Nassau County in March 2010 hoping to do the same thing, buying three papers and opening two more in 2013.

The opening of the Port Washington Times, Blank Slate’s sixth paper, is the latest step toward building a successful company founded on professional, comprehensive journalism that serves the community’s residents and businesses, Blank said.

“I’ve always viewed that good journalism is good business — that if we do a good job of providing the news and information that’s important to people, that we’ll build a readership,” he said. “And if we build a strong readership, that allows us to provide a good option, a good place for businesses to advertise and reach our readers.”

Blank said Blank Slate is “very excited” to be opening in Port Washington, a logical home its newest newspaper as a “close-knit community with a strong identity” where residents are highly involved and want to stay informed.

Blank Slate’s Roslyn Times and Manhasset Times already cover some aspects of Port Washington, he said, and the company has established a reputation there for “editorial excellence” and professional, thorough coverage of community issues.

“We’ve gotten tremendous reception, and we have seen that there’s a real hunger and desire for the type of news coverage that we provide in local communities,” Blank said.

Blank has hired a reporter dedicated to covering Port Washington.

“We’re looking to be the paper of record, covering all aspects of the community in detail,” Blank said.

Port Washington also has a strong business community and advertising base that’s long been limited in their choices for newspaper advertising, Blank said.

Because it has partnerships with papers further east and on Nassau County’s South Shore, a website and email newsletters, Blank Slate offers cost-effective targeted advertising daily papers and other weeklies don’t, Blank said.

Rather than paying for large circulation in a paper such as Newsday, he said, local advertisers are “not paying for people who are unlikely to come there.”

The reception to the paper’s opening has been as good or better than any of the 16 other places Blank has started a paper, he said.

Blank said his experiences as a Pulitzer Prize-nominated investigative reporter who worked for 10 years as a daily newspaper reporter and editor and helping manage a family retail business have informed his 27 years as a publisher and his work growing Blank Slate.

Since starting the Roslyn and Manhasset papers, he said, the company has built its editorial presence, grown advertising sales and has gotten more sophisticated with its website.

The company is now starting to be recognized for the quality coverage it provides, Blank said.

“It takes some time to prove yourself and to get recognition,” he said. “I’ve had people telling me about many of the improvements that we’ve made that actually took place a while ago, but it’s actually sinking in now.”