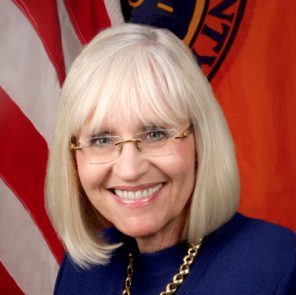 Town of North Hempstead Supervisor-elect Judi Bosworth (D-Great Neck) is looking to get off to a quick start when she takes office in January.

Bosworth announced this week the formation of her transition team, to be led by former Town of North Hempstead and Nassau County administrator Art Gianelli.

“He brings great  experience and a wonderful sense of professionalism to the process,” Bosworth said. “My goal is to be able to the old colloquial, hit the ground running. I want to make sure we have the structure in place, that we have the foundation to build good government.”

Bosworth, who will be leaving her position on the Nassau County Legislature following her victory in the supervisor race over Town of North Hempstead Councilwoman Dina De Giorgio (R-Port Washington), said she is planning a series of meetings with commissioners of town departments, as well as on-site and off-site visits to observe how those departments function.

Department heads will be asked to prepare assessments of their offices, laying out their strengths and weaknesses as well as opportunities and threats to their operations, Bosworth said.

“That’s very important to me,” Bosworth said. “My style is to be a hands on leader, and this my first step in being able to do that.”

Bosworth said her first priority when taking office would be to address problems with the town’s building department.

Reforming the department, which has been beset with complaints over service and efficiency, was a central plank in Bosworth’s campaign.

Bosworth and running mate, Town of North Hempstead Clerk-elect Wayne Wink (D-Roslyn,) laid out a seven-point plan that they said would improve the experience of residents seeking information or permits from the department by taking steps including the creation of an applicant advocate position and expanded building department hours.

“That wasn’t just election speak. My first priority is addressing the building department,” Bosworth said. “That is not something that can wait.”

North Hempstead needs to be known as a place that is friendly to property owners, Bosworth said, adding that she would quickly move to appoint an applicant advocate to represent the interests of residents seeking permits.

“We’re going to have to do a top down analysis of what’s happening in the building department to see what we have to do to achieve those goals,” Bosworth said.

With six weeks remaining until she is sworn in to the town’s top executive post, Bosworth said she is excited to take the reins from interim Town Supervisor John Riordan.