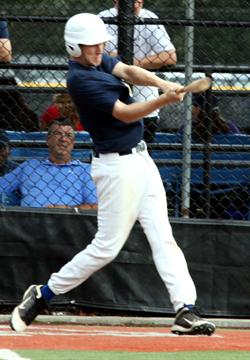 Brian Trabulsi, captain of the Chaminade High School varsity baseball team, has spent 70 percent of his life on a baseball field according to assistant coach and longtime friend of the Trabulsi family, Shaun Manning.  Beginning his baseball career at age six, Trabulsi will attend Villanova University next Fall and, according to Manning, may even have the Major League Baseball in his future.

“He’s one of the better players on Long Island,” Manning said.  “He’s a team leader and once he puts some more weight on his frame and continues to grow naturally, he’ll definitely be a professional prospect.”

Standing at 6 feet 3 inches tall, Trabulsi is described by the Villanova Athletic Department as a “versatile utility player who can play the corner infield spots and all three outfield positions.”

Trabulsi, who hails from Malverne, comes from a family of accomplished baseball players. His older brother Michael played under Manning at Chaminade as well and for Scranton University, while his father played at Providence College.

Trabulsi will bat in the middle of Chaminade’s lineup, play third base and has already led his team to consecutive wins against Xavier and Poly Prep to start the 2013 preseason schedule.

According to Manning, Trabulsi received interest from approximately 15 collegiate schools, including seven with “firm scholarship offers.” Manning also said that Trabulsi has been drawn the notice of numerous scouts.

“He’s a hard worker, puts his time in the weight room, the batting cage and of course on the field,” Manning said. “He does what he needs to do.”

In addition to his success on the baseball field, Trabulsi is an honor roll student at Chaminade with a 90 average and, according to Manning, scored an 1190 on his SATs.

While Manning says that records set by previous baseball players at Chaminade are “very high up there and tough to break,” he expects Trabulsi to finish in the top 10 of a few different categories by the time he leaves for Villanova.