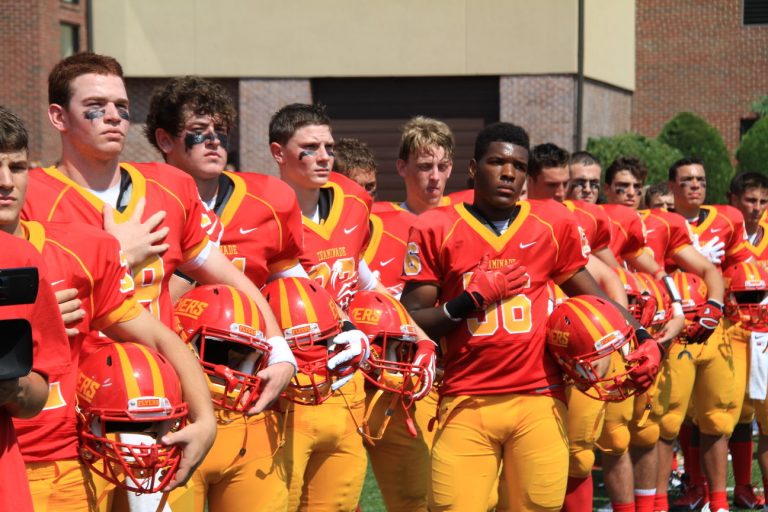 Chaminade High School dedicated its new Gold Star athletic stadium in Mineola last Saturday afternoon, honoring the memory of the 56 Chaminade alumni who have lost their lives in military service for their country from World War II to the wars in Afghanistan and Iraq.

Gold Star buttons are traditionally given by the U.S. military to family members of those who have fallen in battle for their county.

Dedication of the stadium facility, renovated at a cost of $2.5 million according to Cleary, preceded the Chaminade Flyers football team’s 2014 home opener on Sept. 6, a 31-13 victory over Kellenberg Memorial High School. The game was twice interrupted by lightning, but the real drama of the day was during the dedication of the new field.

Cleary said U.S. Marine Brig. Gen. Kevin Killea, Chaminade class of 1983, and Navy Cmdr. Matthew Bonner, class of ‘89, read the names of the 56 Chaminade alumni who perished in service for their country while taps were played. The names included Killea’s brother, William, who was killed in a training accident in Pensacola, Fla., when his younger brother was a child.

Cleary said the renovation of the stadium was overdue. A turf field had been installed on its surface 12 years ago, but was in need of replacement. He said the viewing stands, which had a capacity for 450 fans, also badly needed a makeover.

“They haven’t been adequate at all the for past decade,” Clearly said. “We wanted the stadium to reflect the standards people expect from Chaminade.”

The $2.5 renovation upgraded the stands to a seating capacity of 1,800 construction of a 5,000-square-foot athletic equipment storage facility under the stands, new bathrooms and a concession area. Cleary said the project, in planning and construction over the past 18 months, also included installation of a turf field on the school’s atheltic practice field.

“We had several alumni who were very generous in supporting it,” he said.

Stephen Boyd, Chaminade head football coach for the past six years, said it was great to be part of the stadium dedication.

“It’s truly an honor to be the first team that gets to play the first game on the field,” Boyd said, adding that the victory over Kellenberg also made the day a special one.

He said he was pleased that Chaminade was playing Kellenberg, a school which is also run by the same Roman Catholic Marianist order of brothers who oversee Chaminade

Cleary said he was also pleased that Chaminade got off to a winning start on the new field. But he said for him, the high point of the day occurred following the dedication ceremony.

He said the sister of a Gold Star alumnus said, “Thank you for doing this for us.” In the emotion of that moment, Cleary said he could find no words to answer her.