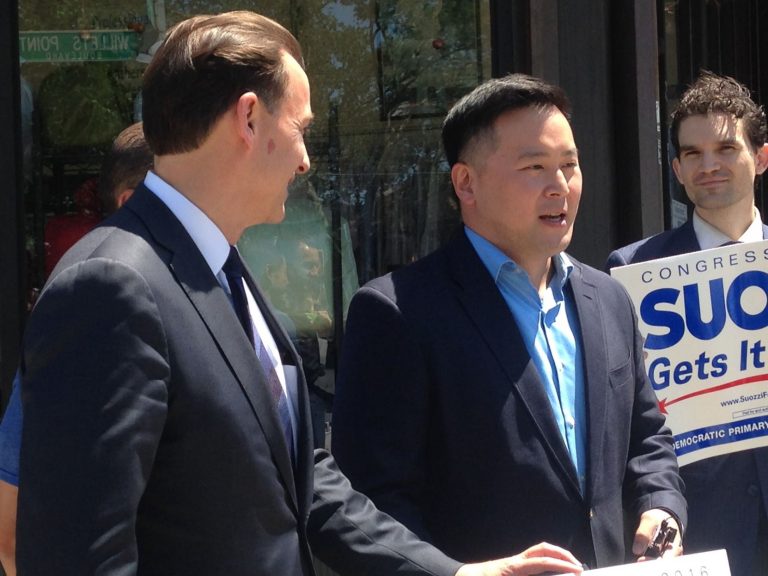 Democrats vying to replace U.S. Rep. Steve Israel this week continued to attack their opponents’ associations with Donald Trump after his comments about a federal judge presiding over a lawsuit against him.

In a statement Wednesday, Kaplan said Martins “has chosen to put party over country” by staying silent on Trump’s claim that Judge Gonzalo P. Curiel could not give a fair ruling in a fraud lawsuit against Trump University because he is of Mexican heritage.

“As someone who is running to represent a diverse community such as New York’s Third Congressional District, it is critical that every voter has full faith that their elected representative both understands their needs and will fight to protect their interests no matter who they are,” said Kaplan, an Iranian immigrant. “Thus, I call on Jack Martins to immediately revoke his support for Donald Trump and his message of hate.”

Martins said two weeks ago that he will vote for Trump, who has enough Republican delegates for the nomination, if he is the party’s nominee.

Trump told The Wall Street Journal June 2 that Curiel has an “inherent conflict of interest” in his case because of Trump’s proposal to build a wall along the U.S. border with Mexico. Curiel, born in Indiana to Mexican parents, has been on the federal bench in California since 2011.

Republican officials who have endorsed the real estate magnate and reality TV star have condemned his racially charged remarks about Curiel.

House Speaker Paul Ryan (R-Wisconsin) called them the “textbook definition of a racist comment.” Trump has said his comments have been misconstrued.

Martins campaign strategist E. O’Brien Murray said he will not speak with anyone from Blank Slate Media until Publisher Steven Blank calls him personally.

Murray would not say why, but his refusal follows the newspaper chain’s editorial last week condemning Martins’ support for Trump.

Blank, who wrote the editorial, said he did not intend to call Murray but would be glad to talk with him or Martins if they called him or publish Martins’ response on the papers’ opinion page. He also said Blank Slate Media would continue to serve the public by covering the campaign in its entirety.

“As Washington Post Executive Editor Martin Baron said when Donald Trump recently revoked The Post’s press credentials, we will continue to cover the campaign “‘honorably, honestly, accurately, energetically and unflinchingly,” Blank said. “‘We’re proud of our coverage, and we’re going to keep at it.’”

A Martins campaign spokesperson, however, sent a statement saying Kaplan, Blank Slate and “anyone else” who knows Martins  “knows full well that he doesn’t agree with Donald Trump’s comments.”

“Suggesting otherwise is nothing more than cheap, petty politics,” the spokesperson said. “Voters are smarter than that.”

Stern has repeatedly said Suozzi, his primary target in the five-way Democratic primary, should return the money given Trump’s positions on immigration and women’s issues.

“When is enough, enough for Tom Suozzi?” Stern said in a news release. “… Actions speak louder than words and Tom Suozzi’s refusal to return Trump’s political contribution is growing more troubling with every passing day.”

Suozzi called Stern’s claims “petty” and “sophomoric,” and said there is no way to return the money his county executive campaign already spent.

“I’m against Donald Trump. That’s not the issue,” former Nassau County Executive Suozzi said in an interview. “Steve Stern making that an issue is why people hate politics. That has nothing to do with this race.”