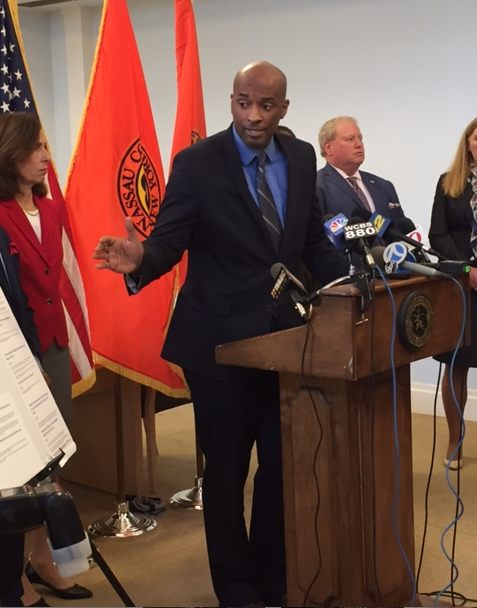 Democrats in the Nassau County Legislature called for Sheriff Michael Sposato to resign on Monday, citing issues with the management of the county jail, including safety and security.

“If you look at the aspects of what the sheriff is responsible for — making sure our facility is safe, secure and protects taxpayers — he has failed grossly,” Minority Leader Kevan Abrahams (D-Hempstead) said.

The call for Sposato’s resignation comes after the Nassau County district attorney’s office said an investigation involving a nurse at the jail who was accused of smuggling contraband into the prison was mishandled.

The nurse brought razors and drugs into the jail, reports show.

Abrahams, speaking at a news conference, also referred to a state Commission of Corrections report, which “identified gross negligence on behalf of Armor Healthcare,” the healthcare provider for the county jail.

“The sheriff on more than one occasion defended Armor even after the attorney general came out with their report, even after the state corrections came out with their report,” Abrahams said. “He continued to support Armor, which to us does not give us the vote of confidence as well as for the taxpayers to ensure that we will be able to have the jail run in a functional matter.”

Sposato worked as a cook in the jail before rising to be named acting sheriff in 2007 by then County Executive Tom Suozzi.

Democrats said they continued to ask for performance reports on Armor, but never received them.

Six inmates died at the county jail in 2016.

Abrahams said some of the deaths were connected to Armor, “and at the same time we have not seen movement to bring in a quality medical-care provider.”

The last of the six deaths occurred in September when an inmate, Michael Cullum, 62, died of heart failure.

“With an election season gearing up and the need for campaign contributions on the horizon, today’s press conference is a cheap political stunt by Democrats to intimidate the Sheriff’s Department into doling out overtime to the union — reversing the tens of millions in savings I achieved,” Sposato said. “I have never allowed inmates to run the asylum and it surely won’t start today.”

Legislators said they fault County Executive Edward Mangano for not taking action, and said it was possible that his recent indictment is distracting him from properly running the jail.

A spokesman for Mangano, Brian Nevin, said it was “an absolutely absurd statement made by politicians looking to grab cheap headlines.”

“Since 2007, Michael Sposato has effectively led the Sheriff’s Department by cutting millions in wasteful overtime and it’s no surprise a proven cost-cutter would be a target of attacks instigated by union bosses,” Mangano said.