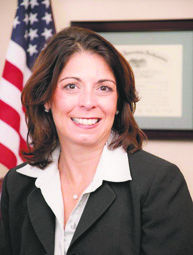 Town of North Hempstead Councilwoman Dina De Giorgio criticized the town’s budget process as a “fraudulent bait and switch” and called on interim Supervisor John Riordan to recuse himself from voting on the budget in a letter released Tuesday.

De Giorgio, a Port Washington Republican who is running for town supervisor against Nassau County Legislator Judi Bosworth, said in an interview that the town has demonstrated a pattern of introducing preliminary budgets that fall with in the state tax cap, but then amending them to higher rates after election day.

“We had a budget hearing and right before the vote on the budget they submitted an amended budget they made budget amendments that raised taxes by 8 percent,” De Giorgio said.

Riordan, who was appointed by the town council earlier this month following former Supervisor Jon Kaiman’s departure for Gov. Andrew Cuomo’s storm recovery taskforce, released a statement saying that he would vote on the budget and would not alter the town’s budgeting process.

“I took an oath to perform the duties of Town of North Hempstead Supervisor and I will fulfill those obligations, especially as it relates to the budget process. It should be noted that state law calls for the budget hearings to be conducted by the first Thursday after Election Day and to be adopted by Nov. 20,” wrote Riordan. “North Hempstead has conducted its budget process according to those guidelines for the past 15 years and as Interim Supervisor I will not make any structural changes to the budget process. If the new administration, which takes office January 1st, chooses to change the process, they will exercise that prerogative when that time comes. In the meantime, I stand with the Town Board as we are committed to supporting the budget in its present form, which falls within the tax cap.“

Kaiman submitted a preliminary budget on Sept. 23, as his last official act in office. The budget, which is subject to amendments, calls for a 1.65 percent increase in the town’s tax levy, which is within the state tax cap.

Republican council members questioned Riordan’s appointment earlier this month. Riordan’s replacement of acting Chris Senior, the town’s Deputy Supervisor who became the non-voting Acting Supervisor when Kaiman left, could give Democrats the supermajority needed to exceed the tax cap on a party-line vote.

When asked whether she believed the town had used its budget timeline in previous years to avoid hiking taxes before election day, De Giorgio said she could not know for sure but that the timing appeared political to her.

De Giorgio called on the town to vote on its final budget before the election in her letter, a suggestion rejected by Riordan in his response.

“Have the public hearing. Give the public the opportunity the ask questions and be heard,” De Giorgio said. “Take a vote so the voters know what budget the elected officials voted on.”

A request for comment from the Town of North Hempstead Democrats was not returned prior to publication.