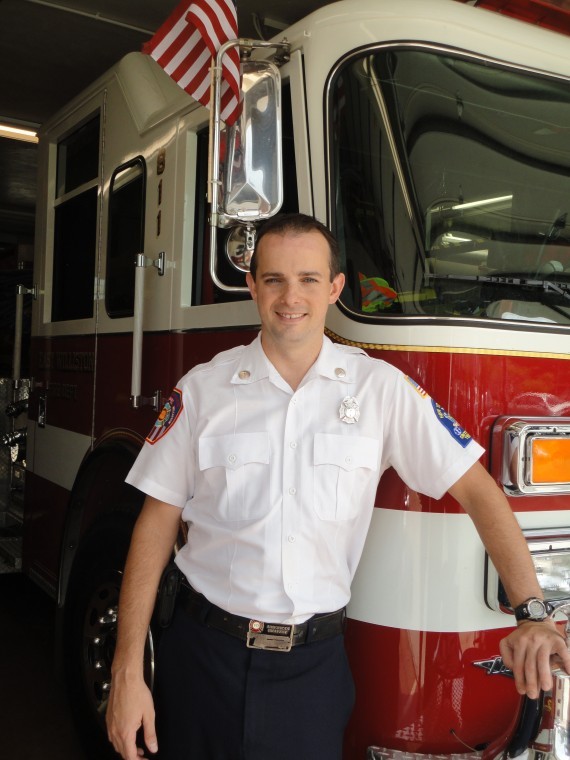 Tom Devaney has made a career out of finding money for local government.

As grants coordinator for the Town of North Hempstead, Devaney secured $3.6 million in grants in the past year including money to cover damage the town sustained during Hurricane Irene.

In his private business, JSK Inc. – also known as Grant Guys – he and his partner have recouped $5 million in grants for fire departments in Nassau County’s 8th Battalion over the past five years.

“That was where we went back and had to recover old grants,” Devaney said. “Things got missed. We said we’d work with these departments. We said, ‘You fight the fires and we’ll get the grants’.”

Devaney, 35, honed his grant-writing skills over the past 12 years while serving in the Mineola Volunteer Ambulance Corps. His partner, Kevin Mulrooney, has been writing grants for the East Williston Fire Department, where Mulrooney has served for the past 28 years and Devaney for the past 18.

Devaney currently serves as a captain and coordinator of emergency medical services for the East Williston Fire Department.

“It got to the point where we just started working together,” Devaney said.

Most recently, the Grant Guys secured a $500,600 federal grant for 13 Nassau County fire departments to pay for recruitment and retention of new members.

“You never hear of the Great Neck Alerts and the South Hempstead Fire Department working together,” Devaney said.

Frequently, he said, volunteers at local fire departments just don’t know how to follow through on the paperwork required to secure grants that are available to them. The money the partners obtained for local fire services included some of approximately $2 million in grants secured by former state Sen. Craig Johnson. The grants were left in limbo after Johnson lost his 7th state Senate District seat to former Mineola Mayor Jack Martins two years ago.

The Grant Guys have worked with Martins on restoring $200,000 to the Mineola Volunteer Ambulance Corps for a new ambulance, $100,000 to the East Williston Fire Department for modifications to its headquarters and $100,000 to the Great Neck Alert volunteers for firefighting equipment.

Devaney and Mulrooney are currently working on restoring grants of $100,000 apiece to the New Hyde Park Fire Department for modifications to its Jericho Turnpike headquarters; the Manhasset-Lakeville Fire Department for computers installed in chief’s cars and an oxygen generator to refill oxygen tanks, and the Albertson Fire Department for improvements to its Dewey Avenue firehouse.

Devaney considers the grant work a part of his community service.

“We’re helping people. We’re keeping the taxes down. We’re doing everything we can to help these fire departments perform,” he said. “It’s all about service to the community.”

Devaney grew up in East Williston, graduated from Chaminade High School  and majored in biology at Catholic University in Washington, D.C., with the intention of pursuing a career in medicine.

After graduating from college, he joined the Mineola Volunteer Ambulance Corps and spent a year working as a paramedic in the New Hyde Park Fire Department. He then spent two years assisting on colonoscopies at a gastrointenstinal practice in Great Neck.

He has been an EMT and an advanced EMT in critical care for the past decade as a member of the Mineola Volunteer Ambulance Corps. He earned the rank of Eagle Scout at age 15 and joined the East Williston volunteer fire service at age 18, while he was still in high school.

“Getting involved in the fire department and the ambulance corps, I enjoyed doing emergency medicine,”Devaney said. “I did different things to see where I wanted to go. I enjoy getting these grants for the fire departments from the government.”

“He’s always there to help us. He’s a leader in our EMS program,” East Williston Fire Department Chief Patrick Theodore said. “He’s changed all our procedures and all our protocol.”

Prior to taking his current job handling grants for the town, Devaney unsuccessfully challenged incumbent Republican Tom McKevitt for his seat in the state Assembly.

He currently serves on the advisory board of the Long Island branch of Infragard, a private/public partnership between private security agencies and the Federal Bureau of Investigation disseminating information on prescription drug robberies to pharmacists.

Devaney was married last year and recently moved to Carle Place with his wife, Kristin, who is an attorney. He said when he has free time these days, he spends it with her.