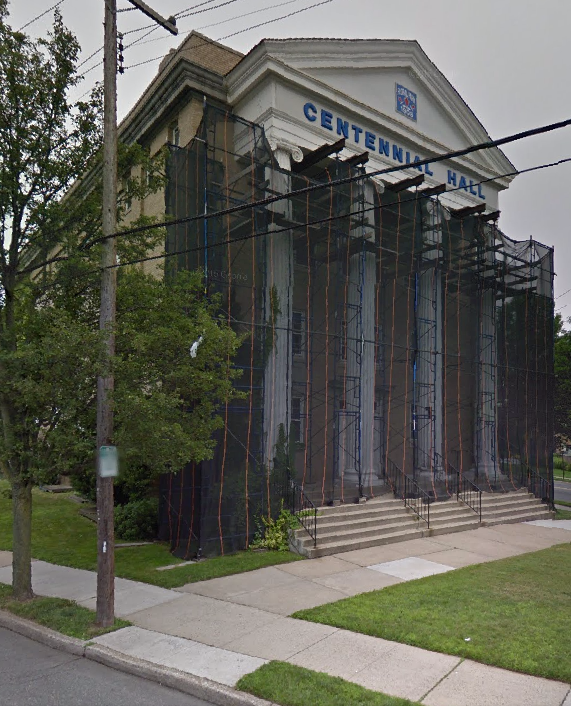 On Tulip Avenue, at one of the entrances to Floral Park, Centennial Hall sits behind a black veil of scaffolding and mesh.

The village bought the 90-year-old building in 2005 for $1.5 million with a $2 million bond. Since then, it has continued to deteriorate and is only occasionally used.

Floral Park wants to change that, but the 50 residents at Tuesday night’s Board of Trustees meeting were divided about how to do it.

There are several options for what to do with the building, each with a different price tag, Village Administrator Gerry Bambrick told them.

The village could raze the former Masonic Temple and replace it with a parking lot for $670,000, or a one-story community center for $3 million. It could also pay $1.25 million to renovate the first floor, or $4.7 million for all four floors.

Three private developers have approached the village about buying the building and putting apartments in it, Bambrick said. For more ideas, the village could also get a real estate firm to solicit other private proposals.

Some, including former Mayor Ann Corbett, said it is imperative that Centennial Hall remain standing. It is a landmark that has become an important to the village’s identity, she said, and few people she knows want it razed.

“When we are returning home from wherever life takes us on any given day, we arrive at the gateway of the Village of Floral Park, and there it stands: the old Masonic Temple,” Corbett said Tuesday night. “We know we are home.”

Several residents said the building should become a mixed-use space that would generate revenue for the village. The lower floors could house a theater group, they said, or a gathering place for teens or seniors, while the upper floors could become offices.

Others disagreed, saying Centennial Hall was beyond repair and that the costs of keeping it would be too great. Calling the building a “financial boondoggle,” Matt Sexton said the village should have used the $500,000 left over from the original bond repair its roof when it put much of it into the general fund to keep taxes low.

A benefit of that, Bambrick said, would be more than $30,000 in tax revenue it would generate following a renovation.

The village has a long way to go before deciding what to do with the property, Bambrick said, and it will continue to get feedback from the public.

“The only definitive decision is that we need to come up with a plan as to how to proceed,” he said.