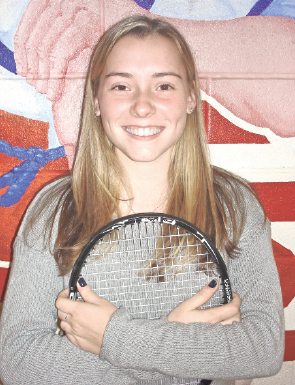 Nicholle Torres, a highly decorated tennis player from Great Neck South High School, will be putting her love for the sport into second gear when she attends Carnegie Mellon University in Pennsylvania this coming Fall.

Believing that academics come first, the AP level senior and future business major says she passed on athletic scholarship offers from other colleges before settling on Carnegie Melon. But she still intends to take the court as a member of the Carnegie Mellon College Tartans women’s tennis team, she said.

Born in Florida and raised in Poland from the age three, Torres came to the United States at 14 years old with an interest in competitive swimming.

“When I was in sixth grade I wasn’t winning because of my short height,” Torres said. “So my mother told me I had to pick another sport.”

Athletic competition runs deep in Torres’, whose mother is an accomplished marathon runner having competed in some of its largest and most demanding events in Europe, Boston, New York City, Miami and Chicago.

“My mother has always been very supportive of me and told me just to try my best at whatever I do,” Torres said.

It was while watching her brother compete as a swimmer that the tennis courts adjacent to the pool caught her interest.

But her route to success was a slow build. In her early days as a competitive tennis player, Torres struggled while many of her teammates were walking off the court victorious, something not lost on her mother.

“I wasn’t winning much, so she went out an bought me a really nice trophy,” Torres said.  “To this day, its my most valued trophy. It has a lot of sentimental value.”

Since then Torres has added to her collection and currently has more than 70 trophies at her home.

Most recently, Torres came in second place this past November in the state tournament in Albany, losing to Syosset’s Vivian Cheng, who is ranked in the national top 100.  Torres then defeated Garden City’s Alexa Graham in straight sets in the semi-final match.

A month prior, Torres had lost to Graham in straight sets, finishing third in a tournament held in Nassau County.

Torres has won 50 trophies in USTA tournaments of different levels, including many first place finishes.

“I play as much as possible because I love it,” Torres said. “I want to improve and challenge myself all the time,”

Offering valuable advice to future tennis players, Torres said it’s important to “love tennis,” and not play because of a parents desire.  Addressing girls specifically, Torres said “[opponents] can be nasty on the court, just don’t take it personally and you’ll be okay.”