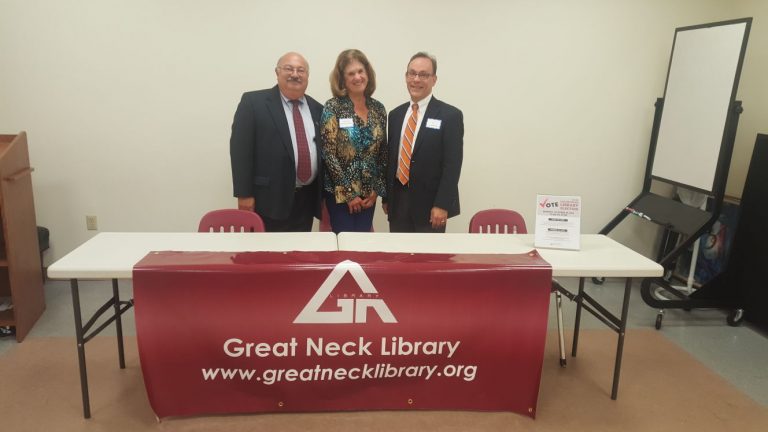 The Great Neck Library announced the results of Monday’s 2016 uncontested election at Tuesday night’s board meeting, which saw one seat on the board of trustees filled as well as two seats on the nominating committee.

Francine Ferrante Krupski, currently vice president of the Board of Trustees, received 102 votes to retain her seat on the board for a four year term ending in Jan. 2020.

Donald Panetta, a 30 year New Hyde Park resident, received 116 votes to win a three year term on the nominating committee ending in 2019 and replace Stacee Bernstein, who did not run for re-election.

“Our goal on the nominating committee is to seek out people to serve the library in a positive and energetic way,” Lustbader said. “Hopefully we’ll continue to do that.”

The elected candidates will take office at the Library Association Annual Reorganization Meeting on Jan. 26, 2016.

Also at the meeting, the board unanimously approved an Interim Director for Levels, the library’s teen center.

Adam Hinz, a Kaplan test prep employee since 2011, will begin his new position at Levels on Nov. 9.

“He wowed us. He was great. The students loved him and the Levels staff really loved him,” Great Neck Library Director Kathy Giotsas said. “He has a very pleasant position and he will get along well with the kids.”

Residents said they had concerns about Hinz’s background in test preparation rather than in the performing arts, which Levels specializes in.

Giotsas said while he did have a background in music, Hinz’s background in managing staff members at Kaplan played a role in his hiring and that his position was not limited to just theatrical and musical production.

“His position is to also manage staff. I need someone who can manage staff and that to me is very important,” she said. “If he’s going to manage a staff of five people, he needs to be able to evaluate their performance and make sure that they meet the needs of the kids they are serving.”

Giotsas said she interviewed two other candidates but believed Hinz was the correct choice.

The next board meeting is on Nov. 17.