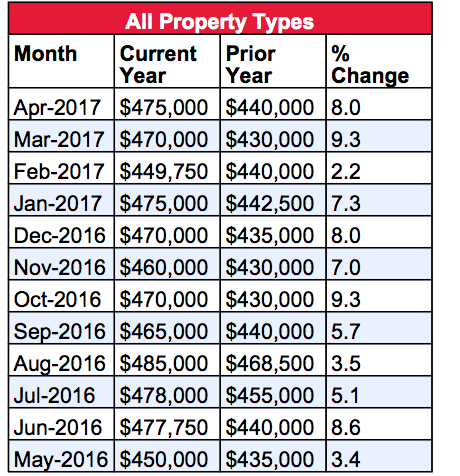 Homes prices in Nassau County rose for the 37th consecutive month — jumping 8 percent in April, $35,000 higher than last April’s mark, according to the Multiple Listing Service.

However, the amount of sold properties in April dipped 10 percent, the largest drop all year, continuing and inventory drought throughout the county.

Last April, 838 homes were sold in Nassau County, and 753 were sold this year, resulting in the third consecutive month home sales have been down.

The first sign of a low inventory occurred in July when home sales dropped 2.9 percent compared to the year before, but the market saw an increase in August and September.

Home sales dropped again in October, increased from November to January and then began falling steadily.

According to data provided by Miller Samuel Inc, a real estate appraisal and consultant company, sales in Nassau dropped have significantly from the third quarter in 2016 to 2017’s first quarter — falling from 3,967 to 2,715.

The median price of properties sold in Nassau was $475,000, which was the highest mark since August, with residential single/multifamily homes and condominiums increasing, according to the Multiple Listing Service.

According to the Multiple Listing Service, the median price of properties pending sale rose 6.1 percent in April compared to last year.

However, like the amount of sold properties, the amount of homes pending sale fell, too, decreasing 9 percent from 1,289 to 1,172  in April compared to last year, after March and February saw slight increases.

The number of homes pending sale has fluctuated often since May, falling and raising month after month, only staying consistent for two months at a time.

The count of residential single/multifamily properties, condos and co-ops pending sale all fell in April.