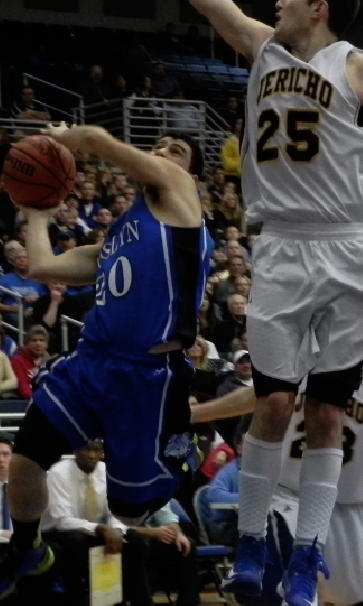 Down by 10 at halftime, the Bulldogs inched their way towards a potential comeback in the second half behind the play of Terrance Pierce.  Pierce scored 10 out of his 15 points in the third quarter, including a three-pointer with :09 left, closing the deficit to 42-34 heading into the fourth and final stanza.

But the Jayhawks bounced back quickly, regaining the momentum despite a furious defensive effort by the Bulldogs down the stretch.

Leading Roslyn 51-40 with 2:00 remaining in regulation, the Jericho bench began quietly celebrating.  Mike Goren drained a three-pointer to put his team up 54-40 in the waning moments, making it was clear which team would walk off the court victorious.

The two teams traded baskets until the bitter end, with Roslyn head coach Craig Murphy and Jericho head coach Wally Bachman meeting at half-court after the final buzzer, congratulating each other on a hard-fought game.

“I love them,” Murphy said about his team after the game.  “Wether we’ve won or lost, they really helped solidify what we want this to be about.  We’re going to the leadership of the entire team, and make sure we go forward.”

“It’s good to play here and we gave it our all,” Terrance Pierce said.  “We just couldn’t do it.”

Bachman expressed his praise for Johnson, who was named the game’s most valuable player.

“He’s been with me for three years, was an All-Long Island player last year and he’s our leader.”  said Bachman of Johnson, who averaged 24 points per game on the season.

Bachman attributed their win to “fundamentally sound defense,” adding “that is the difference in winning these types of games.”

Jericho will play Amityville in the Long Island championship Saturday at Hofstra University in Hempstead.