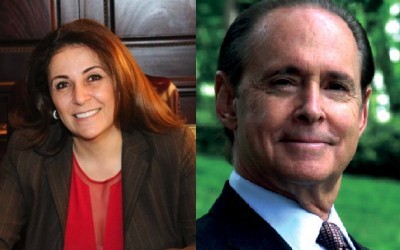 With just over one week left before Village of Kings Point voters will decide this month’s lone contested election in Great Neck, a major fundraising effort has heated up between the two political parties engaged in the mayoral and trustee race.

Sasson is running against Kings Point Mayor Michael Kalnick, who has been in office for 30 years, while Schifter and Elnekaveh are opposing the village’s incumbent trustees Sheldon Kwiat and David Harounian.

“That’s democracy, that’s a great thing,” said Lawrence Levy, executive dean of the National Center for Suburban Studies at Hofstra University. “It actually is a good thing that people who care, care for more than just one election cycle.”

“It’s one thing to have people grumbling about a particular narrow grievance,” he added, “but if they’re concerned enough to organize and stay around for a whole year, it means there’s life out there in the community.”

But concerns have arisen among residents and candidates alike over the sources of a more than combined $55,000 of funds raised by the parties, as well as the negative tone campaign material has begun to take on during the lead up to the Tuesday, June 19 election.

“We’re getting tremendous support,” said KP Responsible Gov’t Party campaign manager Phil Orenstein, who spoke on behalf of his candidates for this story.

As of May 16, the KP Responsible Gov’t Party had raised “roughly around $25,000” in campaign contributions from a “few dozen” supporters, Orenstein said.

With the next deadline to file financial disclosures set for June 8, Orenstein said he was unable to provide the exact amount of money his party has currently raised as of press time on Wednesday.

Orenstein said, however, that his candidates have received plenty of financial donations from local residents.

“I feel the momentum is really on our side,” he said. “We’ve been going door to door and the majority (of feedback) is positive and supportive of our candidates with very few negatives. I think we definitely stand to win this election.”

Village of Kings Point Trustee Ron Horowitz said the incumbent candidates’ Taxpayers Party had raised $30,500 as of today’s deadline for financial disclosure. He said that reflects and increase of $11,500 since the party declared it had raised $19,000 on May 16.

Horowitz, who spoke on behalf of Kings Points’ incumbent candidates, said support of the village’s current leadership has been strong as well.

For Jerry Kremer, a former 23-year veteran of the New York State Assembly who is a lawyer and chairman of Long Island-based Empire Government Strategies, the amount of money raised in the election has not become unusual – yet.

What has created suspicion according to one Great Neck resident, who wished to remain anonymous, is the source of the fundraising and several articles that were recently published in the Long Island Jewish World in support of the KP Responsible Gov’t Party.

“What’s discouraging to me is that the opposition is making claims about our campaign that our completely unsubstantiated,” Horowitz said.

Over the past few weeks, Horowitz said he has personally received two phone calls from Kings Point residents who complained of negative phone calls from representatives of the KP Responsible Gov’t Party.

“I’ve received phone calls from people complaining of the other side making phone calls telling lies about our candidates,” he said.

The most concerning of the allegations against the village’s incumbent candidates made in the alleged calls were “that they are trying to privatize village property and profit from that themselves,” Horowitz said.

“You can’t respond to every one of these things,” Horowitz said “We’d rather talk about our record than worry about mistruths that are being spread around on the telephone.”

An article, which appeared in the May 4-10 issue of the Long Island Jewish World, has also garnered controversy in the village.

According to the resident, who wished to remain anonymous, the story was written by a conservative, “tea party” political activist from Michigan, who was hired by the KP Responsible Gov’t Party in an attempt to create controversy in this month’s race.

Orenstein said the article’s author has “no connection to the candidates whatsoever.”

The KP Responsible Gov’t candidates were “surprised” to read the article when it appeared in the Long Island Jewish World, Orenstein said.

“They have nothing to do with those articles that were published by him or what I heard was distributed,” said Orenstein, who also dismissed the idea of slanderous phone calls being made by his party.

But, Orenstein did not distance his party from the material relayed in the controversial article.

“I think some of the thing that they said were actually were factual,” he said of the story. “Reading it myself, and hearing from others, some of the things were based on actual facts. There was electioneering in the voting place.”

Representatives from the Long Island Jewish World did not return telephone calls requesting a comment on this story.

“It was just an article that seems to be calling for a fair and balanced election,” Orenstein said. “Let the right candidate win the election, but let them win fairly.”

Last summer, Sasson and Schifter challenged Kings Point’s seven-term incumbent trustee Aron and Horowitz, who was appointed to join the village’s board in March of 2011 to fill the remainder of a term vacated by former Trustee Richard Sokolov.

But there were 130 write-in votes disqualified in last year’s controversial election, which could have seen a write-in candidate receive up to 217 votes if every one had been counted.

Sasson and Schifter last summer threatened to file a lawsuit for alleged voter fraud carried out by village election officials.

“The lawsuit was never filed,” Orenstein said last month. “They decided to let the residents seek justice through the ballot box rather than the courts.”

With controversy surrounding the alleged tampering of Kings Point’s election from out-of-state political activists, Levy said it may not be a stretch to imagine that national “conservative, tea party” organizations would become involved in a local race.

Levy said that in recent elections, the Internet has created political activists “who are thinking locally, but acting globally.” He said these activists, or organizations, might want to “pursue their issues or their grievances in other places to develop a national movement.”

“Now somebody could post a blog, or tweet, about a California activist organizing on Long Island and it can go viral, at least in the definition of viral for that community,” Levy said. “It’s something that local officials are going to have to deal with. They can’t hide from the new reality of political campaigning and community organizing.”

In addition to the allegations made against the KP Responsible Gov’t candidates, Orenstein said the Kings Point incumbents’ Taxpayer Party has also made baseless claims against his candidates.

Horowitz, however, said those claims are baseless.

“The mayor and the trustees are dedicated public servants,” he said. “They’re not going to get into the gutter. They have too much experience, too much of a track record, to waste time on mistruths.”

Kings Point, which includes 5,005 residents and 1,475 households, will hold voting in its election on June 19 from 12 until 9 p.m. at its Village Hall located on 32 Steppingstone Lane.

The Kings Point Civic Association and the Great Neck League of Women Voters are scheduled to hold a debate on Monday from 7 until 9 p.m. at the John F. Kennedy School auditorium.

Horowitz said the debate could serve as a welcome chance for Kalnick, Harounian and Kwiat to clear the air about the election.

“They’re going to talk about their records and they’re going to ask the residents of Kings Point for their vote because their administration has put the village in a stature that led all of our residents to aspire to live there,” Horowitz said.

The members of the KP Responsible Gov’t Party have also spent time recently gearing up for the debate.

“The campaign is just going strong,” Orenstein said. “Until the 19th, we’re not taking any chances.”