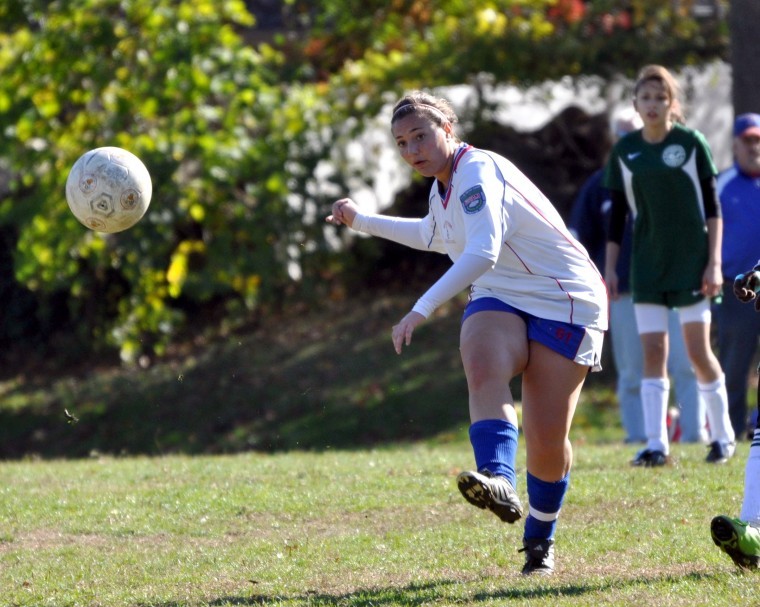 The New Hyde Park Kool Kats were on the winning side of their match with the Brentwood Diamonds by the score of 2-1.

The Kool Kats who are currently in second Place in the U-17 division 4 of the LIJSL, with a record of 5-1-1, started out a bit shaky.

At about the 20-minute mark a speedy forward for the Brentwood team pulled away from the defense and placed the ball into the far corner of the net to put the Diamonds up 1-0.

Despite a series of corner kicks and relentless pressure by the Kool Kats they were not able to find the net.

Finally, during the 32nd minute right wing Emily Bunyon (assist) gathered the ball and made a crossing pass to Lady Abikaram (assist) who found striker Casey Naab cutting to the net. Casey banged the ball home for the Kool Kats first score of the game.

The pressure continued with the Kool Kats tallying 9 shots on goal in the first half in addition to nine corner kicks.

With about a minute left in the first half New Hyde Park’s Goal Keeper, Lisa Famularo, came up big stopping a hard low shot that she had to dive to her right to stop. This kept the game knotted at 1-1 going into the break.

When the 2nd half began it was evident that the Kool Kats were determined to leave the field victors.

The defense really stepped up holding the Diamonds to zero shots in the 2nd half. Defensive Captain Emma Innella along with Lady Abikaram, Brianna Higgins and Erin Balletta were all solid, but the difference in the game was the play of Kerry Neubert who had an outstanding game on defense.

The game winner came early in the 2nd half.

At the 56th minute stopper Brianna Higgins (assist) passed the ball to Naab, who scored her 2nd goal of the game (10th of the season) to put the Kool Kats in front for good.

Due to injuries and the loss of key personnel, for the game, Lady Abikaram had to play both midfield and defense. Abikaram rose to the occasion playing an outstanding game in both positions.

Coach Wheeler was very pleased with the performance of the team.

Hopefully the girls can continue to shine in their three remaining games.