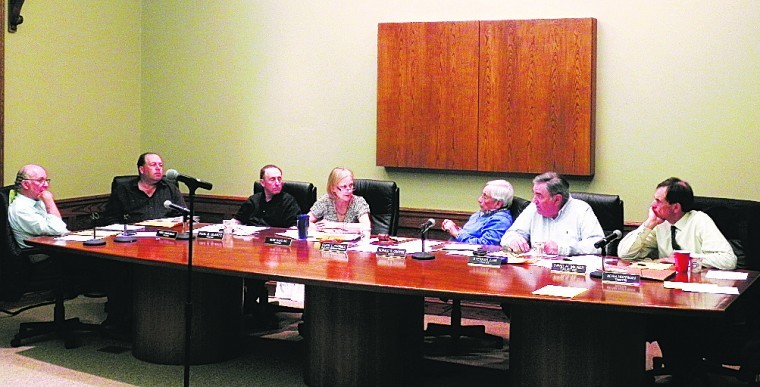 Two representatives from Johnson Controls Inc., Thomas J. Burke and Ken Peterson, presented their proposal for an energy conservation contract to the Village of Lake Success on Monday evening.

Invited by the Village, JCI proposed  to analyze the entire village and make energy improvement adjustments.

According to JCI’s estimations, this will cost the village $1.7 million, and over a period of 15 years, and save the Village $2.2 million.

After their proposal, the board went into executive session to consider the contract, but weren’t able to decide.

“We deal with local schools and government, and are the number one provider of energy service contracts on Long Island,” said Burke.  “We will improve any pre-existing conditions that consumes energy.”

If approved, JCI plans to begin right away by sending a team of representatives to access each location.

In other news, the village approved a request by Culinart to advertise to the public for a planned Thursday night Tapas on the Terrace at Mezza Lounge.  It will be held at the Village Club at Lake Success on Thursday, June 28, and will be a small plate/tasting event.

“It’s to see how the public receives their work, and if they can develop a new following,” said Cooper.

This comes after the Village awarded a three-year contract extension to Culinart, despite some negatives comments from the public regarding the quality of their services.

As a new part of their contract, Cullintart is permitted to put a heavier emphasis on publicity and marketing.

Culinart has provided catering services to the Village Club for the past decade, however, this event will serve as an opportunity to showcase a new image for the company.  Further details about the event will be released from Culinart prior to June 28.

The village approved of a proposal by Nelson & Pope for drainage improvements on Pine Hill Road.  This has been an ongoing issue for the village, which was thought to have been fixed when the sewer traps on Lakeville Road were cleaned out in the summer of 2011.

“It’s really the responsibility of Nassau County to clean them. However, they have been remised to do so, and as a result we instructed our DPW to do it,” explained Cooper.

Nelson & Pope will conduct an engineering study within the next 30 days to determine how to permanently solve the problem.

According to their assessment, the village can prevent further drainage issues by hanging grating, preventing debris from falling into catch basins, taking out dead basins and adding to the sewer line, and observing the size of the drain pipe to see if it is too small.