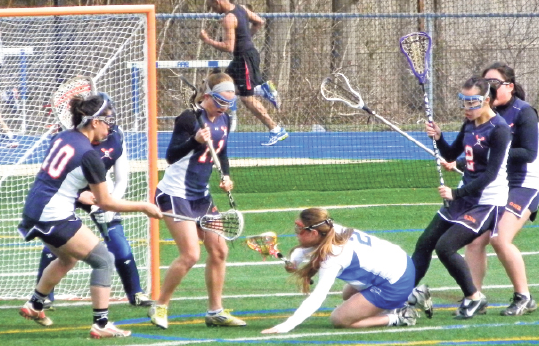 Scoring 12 of their 14 points in the first half, the Lady Bulldogs shifted all their focus to defense in the second half, stifling their opponent’s offense and preventing the Lady Rebels from making a comeback.

Allison Schneider led the way with a game-high four goals and four assists for Roslyn, while teammates Lexi Singer and Lindsey Wolfe added three goals and two assists each.  All three are returning starters from last year, with Katy Ansel and Arielle Mayourian rounding out the senior class.

The Lady Bulldogs are improved to 1-0 in Conference IV and 3-0 overall, while Great Neck South stands at 1-0 in Conference V and 1-2 overall.  The Lady Rebels secured their first league win against Valley Steam District on March 22 with a 19-11 victory. Roslyn did the same a day prior with a 14-8 victory over Glen Cove.

Sam Rickey led the Lady Rebels with two goals, while Alexa Thorne, Jill Weihns and Sandy Lopez chipped in one goal each.

The Lady Bulldogs were defeated by Long Beach in the first found of the Nassau B playoffs last year, 16-1, which head coach Michelle Crennan said her team “got a taste of success last year and want to get back to that spot this year.

“We’re working on the fundaments everyday at practice and fine-tuning our performance,” Crennan added.

With three returning senior captains – six seniors in all – and a solid crop of juniors and underclassmen up from the junior varsity, Eisenhauer says she is coaching a very diverse team.

“We’re working on our fundamentals and conditioning so we’re that much faster and stronger out of the field,” Eisenhauer said.  “We’re implementing playing and trying to develop. I’m hopeful this will be a very successful season for our team.”